Pressure regulators are used in the line supplying air-operated devices. These compo­ nents supply less than full system pressure at a constant outlet pressure unaffected by fluctuations in inlet pressure. Spray guns, air cylinders, hoists, pneumatic screwdriv­ ers, and most other devices having a narrow operating air pressure range benefit from the use of a pressure regulator.

Figure 19-1 shows the essential parts common to most pressure regulators.

The body contains essentially a two-way poppet valve. Two separate forces, acting in opposition, operate this valve. One force is the spring, tending to open the valve; the other force is the diaphragm acting against the spring to permit the valve to close. These two forces working against each other determine the position of the valve and the amount of airflow.

During operation, the spring is set to provide a certain force against the valve. The valve is opened to supply pressure and allows air to flow. Flow through the regulator and downstream resistance cause the outlet pressure to increase. This increase acts against the underside of the diaphragm. The pressure will rise until the diaphragm exerts sufficient force to just balance the spring force. At this point the inlet pressure will close the valve.

As the air is used, the outlet pressure falls and the spring can again overpower the dia­ phragm until the valve opens enough to restore the desired outlet pressure setting. Thus, a nearly constant pressure is maintained, regardless of airflow, up to the capac­ ity of the regulator.

In all pressure regulators, as the flow is increased the outlet pressure drops below the original pressure setting. This deviation between the actual and set pressure is called 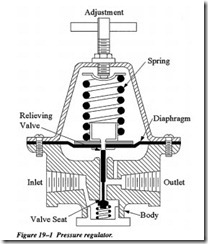 the regulator “droop.” There are ways of compensating the regulator to minimize this “droop,” but it will always be present to some extent.

The illustrated regulator is of the self-relieving type. It consists of a port through the diaphragm and is normally closed by the valve stem. The spring holds the diaphragm against the stem and closes the small valve. If the outlet pressure rises over the setting, it lifts the diaphragm off the stem. This causes the port to open and allows excess air to escape, reducing the pressure. Relieving regulators have the advantage of venting excess air when the regulator setting is decreased. If pressure should rise in the outlet pressure circuit, in a nonrelieving-type regulator, the regulator will not control it.

Airflow must be monitored regularly for a variety of reasons. Flow measurement is required to determine the air consumption of pneumatic tools and devices, actual compressor output, and the pressure drop characteristics of valves and other compo­ nents.

The measurement of flow in pneumatic systems is much more difficult than it is in hydraulic systems. Hydraulic flow is easily determined by catching and measuring the volume of liquid that flows in a known period of time. For small airflows this can also be done with a water-displacement chamber, but it is not usually convenient. So, indi­rect methods are used. The airflow measuring devices include rotometers, orifice meters, pitot tubes, and a variety of other special devices. For industrial purposes, air­ flow is commonly stated in terms of cubic feet per minute (cfm) for large flows, and cubic feet per hour (cfh) for small flows. Flow may be measured at any desired pres­ sure, but is usually stated in terms of flow at standard conditions (14.7 psia and 70.F).

The most common measuring device for airflow is the rotameter. This device consists of a tapered vertical tube with a ball or other type of “float” in it. The airflow lifts the float upward until it reaches a point where clearance is sufficient to allow the flow to pass. A scale is provided on the tube so that the flow is indicated by the height of the ball against the scale markers.

The flowmeter is calibrated for atmospheric-pressure operation. At higher pressures the air is denser. Because the air is denser, the flow readings indicate less than the actual flow. To compensate for this, corrections must be made by using chart in Figure 19-2.

For highest accuracy, a correction should be made for air temperature also, but this can be neglected at normal temperatures.

To use the correction chart, do the following:

1. Draw a line horizontally from the observed reading to where it intersects the diagonal line for the actual flowmeter pressure. 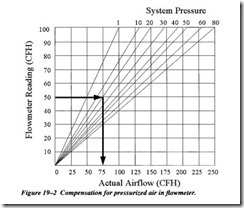 2. From that intersection, draw a vertical line down to read actual flow at the bottom of the chart.

3. The example shown in the graph is a flowmeter reading of 50 cfh, at 20 psig. The actual airflow is 75 cubic feet per hour (cfh).