Gravity, applied forces, and atmospheric pressure are examples of static factors that apply equally to fluids at rest or in motion. Inertia and friction are dynamic forces that apply only to fluids in motion. The mathematical sum of gravity, applied forces, and atmospheric pressure is the static pressure obtained at any one point in a fluid system at a given point in time. Static pressure exists in addition to any dynamic factors that may also be present at the same time.

Remember that Pascal’s law states that a pressure set up in a fluid acts equally in all directions and at right angle to the containing surfaces. This covers the situation only for fluids at rest. It is true only for the factors making up static head. Obviously, when velocity becomes a factor, it must have a direction of flow. The same is true of the force created by velocity. Pascal’s law alone does not apply to the dynamic factors of fluid power systems.

The dynamic factors of inertia and friction are related to the static factors. Velocity head and friction heads are obtained at the expense of static head. However, a portion of the velocity head can always be reconverted to static head. Force, which can be produced by pressure or head when dealing with fluids, is necessary to start a body moving if it is at rest, and is present in some form when the motion of the body is arrested. Therefore, whenever a fluid is given velocity, some part of its original static head is used to impart this velocity, which then exists as velocity head.

Review the system illustrated in Figure 2-6. The chamber on the left is under pressure and is connected by a tube to the chamber on the right, which is also under pressure. The pressure in chamber A is static pressure of 100 psi. The pressure at some point along the connecting tube consists of a velocity pressure of 10psi exerted in a direction parallel to the line of flow, plus the unused static pressure of 90 psi. The static pressure (90 psi) follows Pascal’s law and exerts equal pressure in all directions. As the fluid enters the chamber on the right, it slows down and its velocity is reduced. As a volume of liquid moves from a small, confined space into a larger area, the fluid will expand to fill the greater volume. The result of this expansion is a reduction of velocity and a momentary reduction in pressure. 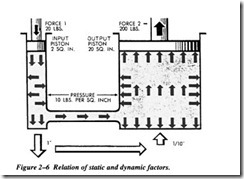 At all points in a system, the static pressure is always equal to the original static pressure less any velocity head at a specific point in the system and less the friction head required to reach that point. Since both the velocity head and friction head represent energy and energy cannot be destroyed, the sum of the static head, the velocity head, and the friction head at any point in the system must add up to the original static head. This is known as Bernoulli’s principle, which states: For the horizontal flow of fluids through a tube, the sum of the pressure and the kinetic energy per unit volume of the fluid is constant. This principle governs the relationship of the static and dynamic factors in hydraulic systems.

Fluid power equipment is designed to reduce friction as much as possible. Since energy cannot be destroyed, some of the energy created by both static pressure and velocity is converted to heat energy as the fluid flows through the piping and compo­nents within a hydraulic system. As friction increases, so does the amount of dynamic and static energy that is converted into heat.

To minimize the loss of useable energy lost to its conversion to heat energy, care must be taken in the design, installation, and operation of hydraulic systems. As a mini­ mum, the following factors must be considered:

Proper fluid must be chosen and used in the system. It must have the viscosity, operat­ing temperature range, and other characteristics that are conducive to proper operation of the system and to the lowest possible friction component.

Fluid flow is also critical for proper operation of a hydraulic system. Turbulent flow should be avoided as much as possible. Clean, smooth pipe or tubing should be used to provide laminar flow and the lowest friction possible within the system. Sharp, close-radius bends and sudden changes in cross-sectional areas are avoided.