All reciprocating compressors have one or more piston arms attached to one or more crankshafts that provide the motive power to a series of pistons. These crankshafts rotate in the same manner as the shaft in a centrifugal machine. However, their dynamics are somewhat different. The crankshafts will generate all of the normal fre­ quencies of a rotating shaft, i.e., running speed, harmonics of running speed, and bearing frequencies, but the amplitudes will be much higher.

The shift in vibration profile is the result of the linear motion of the pistons that are used to provide compression of the air or gas. As each piston moves through a com­ plete cycle, it must change direction two times. This reversal of direction generates the higher second harmonic (2x) frequency component.

In a two-cycle machine, all pistons will complete a full cycle each time the crankshaft completes one revolution. Figure 14-8 illustrates the normal action of a two-cycle or single-action compressor. Inlet and discharge valves are located in the clearance space and connected through ports in the cylinder head to the inlet and discharge connections. 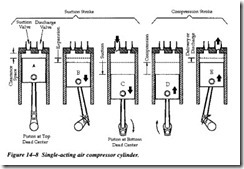 During the suction stroke the compressor piston starts its downward stroke and the air under pressure in the clearance space rapidly expands until the pressure falls below that on the opposite side of the inlet valve (Figures 14-8B and l4-8C). This difference in pressure causes the inlet valve to open into the cylinder until the piston reaches the bottom of its stroke (Figure l4-8C).

During the compression stroke the piston starts upward, compression begins, and at point D has reached the same pressure as the compressor intake. The spring-loaded inlet valve then closes. As the piston continues upward, air is compressed until the pressure in the cylinder becomes great enough to open the discharge valve against the pressure of the valve springs and the pressure of the discharge line (Figure 14-8E). From this point to the end of the stroke (Figures l4-8E and l4-8A), the air com­ pressed within the cylinder is discharged at practically constant pressure.

The impact energy generated by each piston as it changes direction will be clearly vis­ ible in the vibration profile. Since all pistons complete a full cycle each time the crankshaft completes one full revolution, the total energy of all pistons will be dis­ played at the fundamental (1x) and second harmonic (2x) locations. In a four-cycle machine, two complete revolutions (720 degrees) are required for all cylinders to complete a full cycle.

Unlike centrifugal shafts, crankshafts have offsets that provide the stroke length for each piston. The orientation of the offsets has a direct effect on the dynamics and vibration amplitudes of the compressor. In an opposed-piston compressor, i.e., where pistons are 180 degrees apart, the impact forces as the pistons change direction are reduced. As one piston reaches top dead center, the opposing piston is also at top dead center. The forces, which are 180 degrees out of phase, tend to cancel or balance the impact forces as the two-piston change direction.

Other configurations, called unbalanced designs, have piston orientations that are nei­ ther in phase nor 180 degrees out of phase. In these configurations, the impact forces generated as each piston changes directions are not balanced by an opposite and equal force. As a result, the impact energy and the vibration amplitude are greatly increased.

Reciprocating compressors, like all reciprocating machines, will normally generate higher levels of vibration than centrifugal machines. In part, this increase is due to the impacts generated as each piston reaches top dead center and bottom dead center of its stroke. The energy levels are also influenced by the unbalanced forces generated by nonopposed pis­ tons and looseness in the piston rods, wrist pins, and journals of the compressor.

In most cases, the dominant frequency will be at the second harmonic (2x) of the main crankshaft’s rotating speed. Again, this is the result of the double impact gener­ ated by the two changes in direction of each piston during one complete rotation of the crankshaft.


Reciprocating compressors have a history of chronic failures of key components that we will now discuss.


Valve failure is the predominant failure mode for reciprocating compressors. Because of their high cyclic rate, in excess of 80 million cycles per year, inlet and discharge valves tend to work-harden and crack or break.

Valves can be monitored using traditional vibration monitoring techniques. However, data must be acquired and evaluated using time-domain techniques rather than fre­ quency-domain. Data can be acquired directly from the valve housings using a digital tape recorder, vibration meter, or real-time analyzer. The acquired time trace will pro­ vide two indices of valve condition: (1) elapsed time of operation and (2) impacts caused by cracked or broken valve components.

The time required for a valve to completely open and return to the fully closed posi­tion should be uniform. The time trace should verify the timing of the valve. If the springs or other valve components have lost memory or are not operating properly, the time interval will change. Comparative analysis of this timing function provides the ability to determine the operating condition of each valve assembly.

Impacts generated by cracked or broken valve components will be clearly visible in the time trace. In normal operation, the valve should generate two impacts for each operating cycle: one when it reaches full open and another when it returns to full close. Both impacts should be of equal amplitude, and the time interval between impacts should be uniform. If components are broken or loose, additional impacts will be observed between these normal impacts. In addition, the impact energy at full open and full closed may increase.

Although a traditional vibration-monitoring program will detect the metal-to-metal rub that results from lube system failure, it will not prevent damage to the compressor. Therefore, the program should include all components of the lubricating system as well as the compressor. Regular monitoring of the lubricating system components will pro­ vide the early warning required to prevent serious compressor damage.


Reciprocating compressors generate pulses of compressed air or gas that is discharged into the piping used to transport it to its points of use. These pulsations can, and often do, generate resonance in the piping system. In addition, these pulses can cause severe damage to other machinery that may be connected to the compressed air system.

Since most compressed air systems do not use pulsation dampers to minimize the pul­sations generated by reciprocating compressors, resonance or the impact of these pulses, called standing waves, generated by these compressors can result in severe damage to other machine trains included in the compressed air system. Although this is not a failure mode of the compressor, it must be prevented to protect other critical plant equipment. Each time the compressor discharges a volume of compressed air, the air tends to act like a compression spring. It will rapidly expand to fill the avail­ able volume of discharge piping, the pulse of high pressure air can result in serious damage.

The full wavelength of the pulsation generated by a double-acting piston design can be obtained by:

Note: For a single-acting cylinder, the wavelength will be twice as long.

Compressor inertia forces may have two effects on the operating dynamics of recipro­ cating compressors. The first is a force in the direction of the piston movement. This force will be displayed as impacts as the piston reaches top and bottom dead center of its stroke.

The second is a couple or moment that is developed when there is an offset between the axes of two or more pistons on a common crankshaft. The interrelationship and degree of these forces will depend upon such factors as ( 1) number of cranks; (2) their longitudinal and angular arrangement; (3) cylinder arrangement; and (4) amount of counterbalancing possible. Two significant vibration periods are set up: the primary at the rotative speed of the compressor and the secondary at twice the rotative speed. 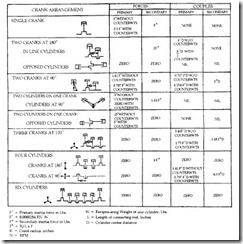 Although the forces developed are sinusoidal, only the maximum is considered in analysis. Figure 14-9 shows relative values of the inertia forces for various compres­sor arrangements. The diagrams are plan views with the exception of the fourth arrangement with cylinders at 90· of elevation.