2. Noise and vibration are increased, with possible shortened seal and bearing life.

The amount by which the pressure in the pump inlet exceeds the liquid vapour pressure is expressed as a head of liquid and referred to as Net Positive Suction Head Available (NPSHA). This is a characteristic of the system design. The value of NPSH needed at the pump suction to prevent the pump from cavitating is known as NPSH Required (NPSHR). This is a characteristic of the pump design.

The three undesirable effects of cavitation described above begin at different values of NPSHA and generally there will be cavitation erosion before there is a noticeable loss of pump head. However for a consistent approach, manufacturers’ and industry standards, usually define the onset of cavitation as the value of NPSHR when there is a head drop of 3%, when compared with the head with cavitation free performance. At this defined onset point, incipient cavitation is present and prolonged operation in this condition will usually lead to damage. It is therefore desirable to apply a margin by which NPSHA should exceed NPSHR. The Hydraulic Institute and EUROPUMP have developed guidelines for NPSHR margins. The web sites for the Hydraulic Institute and EUROPUMP are given at the bottom of this page.

As would be expected, the NPSHR increases as the flow through the pump increases, see Figure 4.2. In addition, as flow increases in the suction pipework, friction losses also increase, giving a lower NPSHA at the pump inlet, both of which give a greater chance that cavitation will occur.

NPSHR also varies approximately with the square of speed in the same way as pump head. Conversion of NPSHR from one speed to another can be made using the following equations.

It should be noted however that at very low speed there is a minimum NPSHR level, NPSHR does not tend to zero at zero speed. It is therefore essential to carefully consider NPSH in variable speed pumping.

The effect of impeller diameter reduction on NPSHR, however, is not the same as on pump head. Pump NPSHR is largely a characteristic of the impeller inlet design, which is not affected by changing the diameter. However because reducing the impeller diameter affects the length of the vanes and the overlap of adjacent vanes, NPSHR increases slightly as the diameter is reduced. The effect is greatest on high specific speed (mixed flow) machines. The pump manufacturer should be consulted on the actual NPSHR variation with impeller diameter.

Methods of varying the performance of rotodynamic pumps

The need for performance variation

It has been explained in Chapter 3 that many pumping systems require a variation of flow or pressure. This section describes methods available to do this. Either the system curve or the pump curve must be changed to get a different operating point. Where a single pump has been installed for a range of duties, it will have been sized to meet the greatest output demand, it will therefore usually be oversized, and will be operating ineffi­ciently for other duties. There is therefore an opportunity to achieve an energy cost saving by using control methods which reduce the power to drive the pump during the periods of reduced demand. Not all control methods achieve this goal as explained in this section. In Chapter 5 the cost benefits of different control methods are described in more detail and in Chapter 8 control parameters are elaborated.

Varying pump performance by changing speed is explained first and in many cases is a cost effective approach with good pay back even if the capital expenditure is relatively high. Other methods of control are then explained so that the most appropriate approach, to minimize life cycle cost, can be chosen.

To make an effective evaluation of which control method to use, all of the operating duty points, and their associated run times and energy consumptions, have to be identified so that the total costs can be calculated and alternative methods compared.

Changing pump impeller diameter also effectively changes the duty point in a given system, see Section 4.2.1.2, and at low cost, but this can be used only for permanent adjustment to the pump curve and is not discussed further as a control method.

To understand how speed variation changes the duty point, the pump and system curves are over-laid. It is important to note that the operating point always falls at the intersection of the pump curve and the system curve. Two systems are considered, one with only friction loss and another where static head is high in relation to friction head. It will be seen that the benefits are different.

Varying speed in a system with only friction head In Figure 4.5, reducing speed in the friction loss system moves the intersection point on the system curve along a line of constant efficiency. The operating point of the pump, relative to its best efficiency point, remains constant and the pump continues to operate in its ideal region. The affinity laws are obeyed which means that there is a substantial reduction in power absorbed accompanying the reduction in flow and head, making variable speed the ideal control method for systems where friction loss predominates. 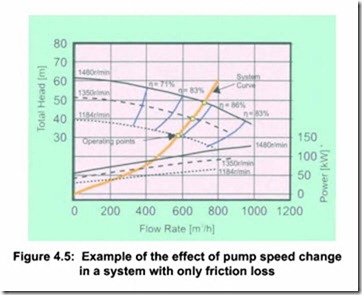 Varying speed in a system with high static head However, in systems with static head, the system curve does not start from the origin but at some value on the y-axis corresponding to the static head, hence the system curve does not follow the curves of constant efficiency, instead, it intersects them. The reduction in flow is no longer proportional to speed; a small turn down in speed could give a big reduction in flow rate and pump efficiency (see Figure 4.6). In turn, this means that the pump efficiency changes when the speed of the pump changes. This is quite contrary to a pump system without static head, in which the pump efficiency remains fairly constant with changing speed. A common mistake is also to use the affinity laws (see Section 4.2.1.1 for information on affinity laws) to calculate energy savings in systems with static head. Although this may be done as an approximation, sometimes it can also lead to major errors.

As can be seen in Figure 4.6, the operating point on the reduced speed curves also moves relatively higher on the pump curve as the speed is reduced. There are problems connected with this situation. A relatively minor decrease in speed can move the pump operating point into an area where the pump should not be operated continuously. Operating the pump close to shut-off head for extended periods of time could severely damage the pump- even though the pump runs at a reduced speed. Decreasing the speed even further causes the flow to go to zero (the 1184 r/min head/flow curve in Figure 4.6). The pump is still consuming energy, which goes solely into heating the liquid through friction, with the result that damaging temperatures can quickly be reached. 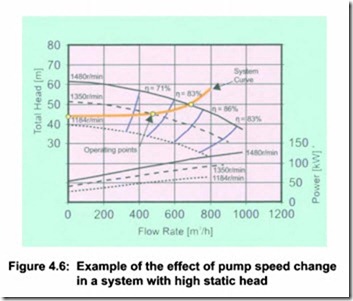 In the satisfactory speed range with this type of system, the drop in pump efficiency reduces the economic benefits of variable speed control. Systems should be examined on a case-by-case basis. This is discussed further in Chapter 5.

Many times it can be advantageous to select the pump such that the system curve intersects the full speed pump curve slightly to the right of pump best efficiency point. In such a case the pump efficiency will first increase as the speed is reduced and then decrease. This can extend the useful range of variable speed operation in a system with static head. On high-energy pumps particularly, the pump manufacturer should be consulted on the safe operating range of the pump.

It is relevant to note that flow control by speed regulation is always more efficient than by a control valve.

Other implications of varying speed In addition to energy savings there could be other benefits of lower speed. The hydraulic forces on the impeller, created by the pressure profile inside the pump casing, reduce approximately with the square of speed. These forces are carried by the pump bearings and so reducing speed increases bearing life. It can be shown that for a rotodynamic pump, bearing life is proportional to the seventh power of speed. In addition, vibration and noise are reduced and seal life is increased providing the duty point remains within the allowable operating range.

The corollary to this is that small increases in the speed of a pump sig­ nificantly increase power absorbed, shaft stress and bearing loads. It should be remembered that the pump and motor must be sized for the maximum speed at which the pump set will operate. At higher speed the noise and vibration from both pump and motor will increase, although for small increases the change will be small. If the liquid contains abrasive particles, consideration should be given to a corresponding increase in surface wear in the pump and pipework.

The effect on the mechanical seal of the change in seal chamber pressure, resulting from a speed increase, should be reviewed with the pump or seal manufacturer, if the speed increase is large. Conventional mechanical seals operate satisfactorily at very low speeds and generally there is no requirement for a minimum speed to be specified. However due to their method of operation, gas seals require a minimum peripheral speed of 5 m/s.

Another energy efficient method of flow control, particularly for systems where static head is a high proportion of the total, is to install two or more pumps to operate in parallel. Variation of flow rate is achieved by switching on and off additional pumps to meet demand. The combined pump curve is obtained by adding the flow rates at a specific head. The head/flow rate curves for two and three pumps in parallel are shown in Figure 4.7. 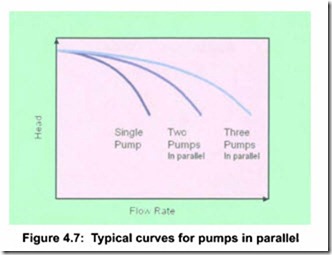 The system curve is usually not affected by the number of pumps that are running. For a system with a combination of static and friction head loss, it can be seen, in Figure 4.8, that the operating point of the pumps on their performance curves moves to a higher head and hence lower flow rate per pump, as more pumps are started. All pumps operate at the pressure where the combined pump curve and the system curve intersect. It is also apparent that the flow rate with two pumps running is not double that of a single pump. If the system head is only static, then flow rate is proportional to the number of pumps operating.

It is possible to run pumps of different sizes in parallel providing their closed valve heads are similar. By arranging different combinations of 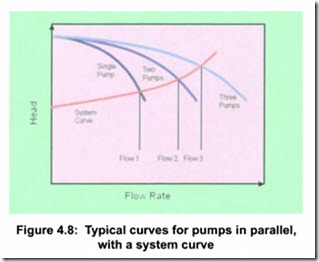 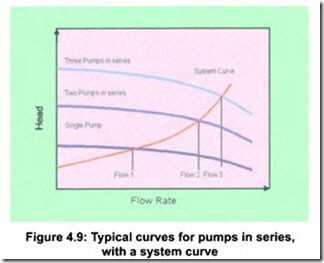 Care must be taken when running pumps in parallel to ensure that the operating point of the pump, when only one pump is running, is acceptable. It can be seen from Figure 4.8 that the pump operates well out along the curve, where NPSHR and vibration levels are higher. The pump manufacturer should confirm that this is a satisfactory operating condition for the period of time that it occurs.