The variables involved in particle degradation are similar to those associated with ero- sive wear. Velocity, once again, is probably the most important variable, but particle size and concentration also play a part. Particle impact angle is equally important, and has a major influence with respect to the selection of pipeline bend geometry. The influence of both particle materials and surface materials must also be given due con- sideration. As with erosive wear, much of the research work into the subject has been carried out for various other purposes, and so the range of parameters investigated is often beyond those associated with pneumatic conveying, but it does provide useful information on the general trends of the variables involved.

Low velocity impacts tend to knock small chips from the edges of particles, whereas high velocity collisions are more likely to shatter particles. In general the rate of damage has been found to be a power law function of velocity, in much the same way as the erosive wear process. The range in value of the power coefficient is also large, and can vary between one and five, depending upon the conveyed material and the system being considered. The possibility of there being a threshold value of vel- ocity, below which no degradation occurs, is also a possibility.

Agricultural products have been widely used in test work. Segler [3] investigated the effects of air velocity, moisture content, pipeline diameter and material concentration on the damage of peas, as a result of pneumatic conveying. His test loop was 73 m long, 112 mm bore and contained four bends. The results of his tests on the effect of 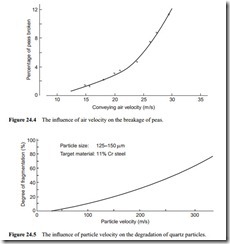 air velocity are presented in Figure 24.4. These showed that the damage increased approximately with the cube of air velocity.

Tilly [4] carried out impact studies with quartz particles against an alloy steel target in a rotating arm test rig. He found that the particles incurred a substantial degree of fragmentation which was dependent upon the velocity of impact. His results are pre- sented in Figure 24.5.

The velocity range comes as a result of their work being applied to aircraft engines. From this it would appear that for fragmentation to occur it is necessary to exceed a threshold velocity of about 15 m/s. Below this velocity the particles may be con- sidered to behave elastically.

In work by Tilly and Sage [5] they impacted quartz particles in the size range of 100–225 µm at velocities of 60, 130 and 300 m/s. Their results, in terms of particle size distribution, are presented in Figure 24.6. Although this data is for conveying velocities much higher than those that would be encountered in a pneumatic conveying system, they relate to just a single impact and so help to illustrate the nature of the problem, for many materials that are conveyed are significantly more friable than quartz.

The results of a programme of tests carried out with 5 mm aluminium oxide particles impacted at 90° against a steel target are presented in Figure 24.7 [2]. 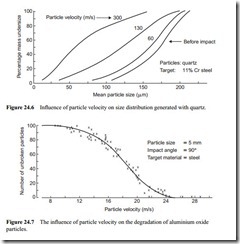 It will be seen from Figure 24.7 that there is a very rapid transition in particle vel- ocity from zero breakage to total degradation. Below a particle velocity of about 9 m/s only elastic deformation occurs and there is no particle degradation. Above a particle velocity of about 25 m/s, however, the stress induced by the impact is always sufficient to damage every particle. It is interesting to note that within the transition region the number of unbroken particles at any given velocity is very consistent and that a smooth transition is obtained from one extreme to the other over this range of velocity.

Tilly [4] carried out impact studies with quartz particles against an alloy steel target in a rotating arm test rig. He found that the particles incurred a substantial degree of fragmentation which was dependent upon the initial particle size. His results are pre- sented in Figure 24.8. From this it would appear that for fragmentation to occur it is necessary for the particles to exceed a threshold size of about 10 µm. Below this size the particles probably behave elastically, for in their test rig the particles would have impacted the target since the tests were carried out in a vacuum.

The results of tests carried out with three different sizes of aluminium oxide par- ticles are shown in Figure 24.9 [2]. The data for the 5 mm particles, which was the ref- erence material in the work, was presented earlier in Figure 24.7. Results from similar tests with 3 and 7 mm aluminium oxide particles, also impacted at 90° against the same steel target are additionally presented in Figure 24.9. A very significant particle size effect is shown. As the particle size increases, the maximum velocity at which no degradation occurs decreases. The transition from no degradation to total degradation also changes, with the transition occurring over a narrower velocity range with increase in particle size.

In more recent work on the influence of particle size, fertiliser particles, also having particle diameters of 3, 5 and 7 mm, were pneumatically conveyed in a test facility to

assess their degradation [6]. In this case the velocity used was that of the conveying air and not that of the particles. In terms of air velocity the 3 mm particles degraded the most and the 7 mm particles the least. The reason for this is that when it is the air vel- ocity that is held constant, the smaller particles are accelerated to a higher velocity than the larger particles. It is because particle velocity has a greater influence on degradation than particle size that a reversal in the influence of particle size has occurred.

With erosive wear of surface materials it has been found that the resilience of the sur- face material can have a significant influence on erosive wear, and that rubber and polymers can offer better wear resistance than metals having a very high hardness value in certain cases. Since the mechanisms of erosion and degradation have many similarities, it is quite possible that resilient materials could offer very good resistance to particle degradation.

Further work by Tilly and Sage [5] showed that fragmentation is also dependent upon the type of target material. Figure 24.10 shows a comparison of their results for quartz impacted against nylon and fibreglass, which with their earlier results for alloy steel demonstrates the complex nature of the problem. Degradation in terms of the influ- ence of initial particle size is used for the comparison in this case.

The results of tests carried out on four different target materials are presented in Figure 24.11 [2]. In each case the targets were 5 mm thick and they were impacted by 5 mm aluminium oxide particles at an angle of 90°. This also shows very clearly that target material can have a very marked effect on degradation. Although there is little difference in the maximum value of particle velocity at which no degradation occurs, varying from 9 m/s for steel to about 14 m/s for Plexiglas and aluminium, very significant differences exist in the transition region between no degradation and total degradation. 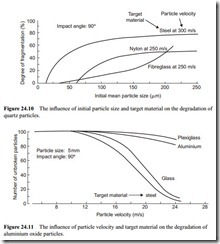 A similar programme to that reported in relation to Figure 24.11 was carried out with steel targets of varying thickness [6]. If the conveyed material is not erosive, in add- ition, a thin walled surface would also help reduce degradation, for the work showed a significant reduction in degradation of the particles with a 1 mm thick target as com- pared with a 2 mm thick target. The force acting on a particle is equal to its mass times the rate of deceleration. This force must be reduced in order to reduce the damage to particles on impact against a surface. This can be achieved to a certain extent by using either a resilient surface material or a surface material that will flex on impact.

In Figure 24.12 the data for the aluminium oxide of Salman et al [2] is presented again, together with the results from identical tests carried out with polystyrene and glass par- ticles. It will be seen from this that polystyrene particles suffer a similar transition from zero breakage to total degradation, but at a slightly higher velocity range than the alu- minium oxide. That different particulate materials can respond in totally different ways is clearly demonstrated by the glass particles. No damage was observed to any of the particles tested up to the maximum particle velocity investigated of 30 m/s.

Particle impact angle, a, was defined on the sketch of the acceleration tube test device shown earlier in Figure 24.3, and is the same as that used in erosive wear work. Impact angle has been shown to be a major variable with regard to the erosive wear of surface materials, and hence is an important consideration in terms of material selection and the specification of components such as pipeline bends. In relation to particle degradation it is equally important, for as the impact angle reduces, so the normal component of velocity decreases [7]. This will have a direct bearing on the deceler- ation force on the particles, as discussed above in relation to Surface Thickness in Section 24.2.3.2.

The results of a comprehensive programme of tests carried out to investigate the influence of particle impact angle are presented in Figure 24.13 [2]. Five millimetres of aluminium oxide particles were impacted against a steel target, which is the refer- ence point in this particular programme of work, and so the data for 90° impact is the same as that presented earlier in Figures 24.7, 24.9, 24.11 and 24.12. It will be seen from Figure 24.13 that there is little change in the response to degradation until the impact angle is below about 50°. There is then a very marked difference in perform- ance with only small incremental changes in impact angle. 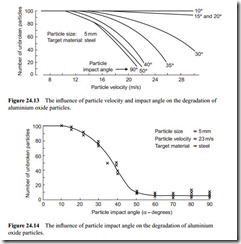 In Figure 24.14 an alternative plot of the data in this programme of tests is pre- sented. This is effectively a slice taken from Figure 24.13 at a particle velocity of 23 m/s. It will be seen from this that tests were carried out at regular increments of impact angle of about 10° between 10° and 90°. This plot shows quite clearly that at impact angles below about 12° no degradation occurs, and that at impact angles above about 55° the degradation remains essentially constant at the maximum value for this particular impact velocity.

Segler [3] investigated the influence of moisture content on particle degradation and showed that degradation can increase dramatically with decrease in moisture content. The results of the following three tests with peas show the sensitivity to this variable:

Segler investigated the effect of particle concentration and found that the damage decreased as the solids loading increased. The damage produced when the peas were introduced individually was four times higher than in dense flow. A similar effect is found in erosive wear and can be attributed to the cushioning effect of dense flows.

He also examined the damage to the peas in identical pipelines having bores of 46 and 270 mm. It was found that the damage in the 46 mm bore pipeline was two to three times greater than that in the 270 mm bore pipeline. His explanation was that the fre- quency of pipe wall impacts, for such large particles, would be more frequent for the small bore pipeline.