Power transistors are used in ac applications ranging up to several hundred kilowatts and switching frequencies up to approximately 10 kHz [1]. Devices for power conversion applications are generally npn type. The power transistor is turned on by supplying sufficient base current, which must be maintained throughout the conduction period. The device is turned off by removing the base drive and making the base voltage slightly negative. The saturation voltage of the device is normally 0.5 to 2.5 V and increases as the current increases. The transistor off-state losses are much lower than the on-state losses because the leakage current of the device is of the order of a few milliamperes. Because of relatively long switching times, switching losses significantly increase with switching frequency.

Power transistors do not have I2t withstand capability. In other words, they can absorb very little energy before breakdown. Therefore, they cannot be protected by semiconductor fuses (like thyristors can), and thus an electronic protection method usually must be provided.

To reduce high base current requirements, Darlington configurations are commonly used. They are available in monolithic or in isolated package designs. The basic Darlington configuration is shown sche- matically in Figure 8.14. The Darlington arrangement offers a specific advantage in that it can consider- ably increase the current switched by the transistor for a given base drive. 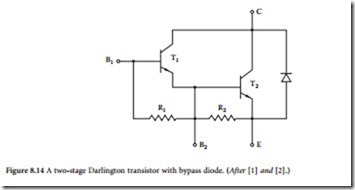 Power MOSFETs are a class of devices marketed under a variety of names by different manufacturers [1]. They have unique features that make them particularly attractive for switching applications. Power MOS- FETs are essentially voltage-driven rather than current-driven devices (unlike bipolar transistors).

The gate of a MOSFET is isolated electrically from the source by a layer of silicon oxide. The gate draws only a minute leakage current on the order of nanoamperes. Hence, the gate drive circuit is simple, and power loss in the gate control circuit is practically negligible. Although in steady-state, the gate draws virtually no current, this is not so under transient conditions. The gate-to-source and gate-to-drain capacitances have to be charged and discharged appropriately to obtain the desired switching speed, and the drive circuit must have a sufficiently low output impedance to supply the required charging and dis- charging currents.

Power MOSFETs are majority carrier devices, and there is no minority carrier storage time. This attribute provides for exceptionally fast rise and fall times. Power MOSFETs are essentially resistive devices when turned on, whereas bipolar transistors present a more or less constant saturation voltage VCE(sat) over the normal operating range. At low currents, therefore, a power MOSFET may have a lower conduction loss than a comparable bipolar device, but at higher currents, the conduction loss will exceed that of the bipolar device.

With recent advancements in MOS technology, ruggedized MOSFETs are replacing conventional MOS- FETs in numerous applications [1]. Theoretically, the secondary breakdown mechanism is absent in a power MOSFET. In the real world of vertical conductive power MOSFETs, however, secondary breakdown exists because of the presence of a parasitic npn transistor, thus forcing chip designers to develop the rug- gedness concept to thwart such failures. The need to ruggedize power MOSFETs is related to device reliability. If a MOSFET is operated within its specification range at all times, its chances for failing catastrophically are minimal. However, if the absolute maximum ratings are exceeded, failure probability increases dramatically. Under actual operating conditions, a MOSFET may be subjected to transients either externally from the power bus supplying the circuit or from the circuit itself, caused, for example, by inductive kicks going beyond the absolute maximum ratings. Such conditions are likely in almost every application and, in many cases, are beyond the control of the designer.

The difference between a ruggedized MOSFET and a conventional device is that the ruggedized ver- sion is rated to withstand a specific amount of unclamped avalanche energy when operated at voltages above its maximum drain-to-source breakdown voltage (BVDSS). In effect, the manufacturer guarantees that MOSFET will not fail catastrophically up to a specified amount of avalanche energy.

The IGBT combines the high input impedance and high- speed characteristics of a MOSFET with the conductivity characteristic (low saturation voltage) of a bipolar transis- tor [1]. The equivalent circuit of an IGBT is shown in Fig- ure 8.15. The IGBT is turned on by applying a positive voltage between the gate and emitter, and as with the MOSFET, it is turned off by making the gate signal zero or slightly negative. The IGBT has a much lower on-state resistance than a MOSFET.

In a sense, the device is similar to a thyristor and MOSFET. To illustrate: for a given IGBT, there is a critical value of drain current that will cause a large enough volt- age drop to activate the thyristor element. Hence, device manufacturers specify the peak allowable drain current that can flow without latch-up occurring. There is also a corresponding gate source voltage that permits this cur- rent to flow, which should not be exceeded. After the IGBT is in latch-up, the gate no longer has any control of the drain current. The only way to turn off the IGBT in this situation is by forced commutation of the current, exactly the same as for a thyristor. If latch-up is not terminated quickly, the IGBT will be destroyed by the excessive 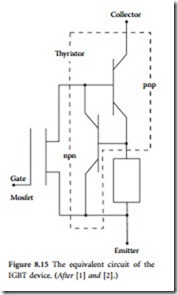 Like the power MOSFET, the IGBT does not exhibit the secondary breakdown phenomenon com- mon to bipolar transistors. However, care should be taken not to exceed the maximum power dissipation and specified maximum junction temperature of the device under all conditions for guaranteed reliable operation.

The on-state voltage of the IGBT is heavily dependent on the gate voltage. To obtain a low on-state voltage, a sufficiently high gate voltage must be applied. The on-state voltage also increases with temper- ature. Compared to a MOSFET structure, the IGBT is generally smaller for the same current rating. At voltages above 400 V, an IGBT can be one third the size of a MOSFET. The bipolar action in the IGBT, however, slows down the speed of the device so that it typically operates at a much lower frequency than the MOSFET. The switching frequency can be as high as 50 kHz for a standard device; higher frequencies are achievable at the expense of higher losses.

The IGBTs cannot be as easily paralleled as MOSFETs can. The factors that inhibit current sharing of parallel-connected IGBTs are:

• Current unbalance at turn-on and turn-off, caused by the switching time difference of the parallel- connected devices and circuit wiring inductance distribution

The MOS-controlled thyristor (MCT) is basically a thyristor with built-in MOSFETs to turn on and turn off the circuit [1]. Device attributes include high-power, 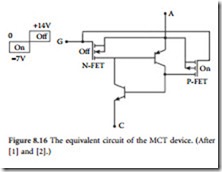 high-frequency, low-conduction-drop, and ruggedness. The MCT equivalent circuit is shown in Figure 8.16. The MCT has thyris- tor-type junctions and pnpn layers between the anode and cathode.

The MCT is turned on by a negative voltage pulse at the gate, with respect to the anode, and turned off by a positive voltage pulse. The MCT can operate at higher junction temperatures than the BJT, IGBT, and MOSFET. The MCT has relatively low switching times and storage time. The MCT is capable of high current densities and blocking voltages in both directions. Because the power gain of an MCT is extremely high, it can be driven directly from a logic gate.