The purpose of the synchronising separator is to slice the sync pulses off the composite video waveform, separate them into line and field, and feed each one to its individual timebase. The process must be immune to changes in the amplitude and picture composition of the video signal.

As explained in Chapter 1, the sync pulses are arranged to fall beyond the black level and to occupy 30% of the total amplitude of the composite video. A clipping network is therefore all that is required in order to sep- arate the sync pulses away from the video information.

Once the sync pulses have been separated from the composite video, the receiver must be able to distinguish between the two types of sync pulses. While the line sync is represented by a straightforward pulse, the field sync is identified by a series of pulse-width modulated (PWM) wave- form consisting of five consecutive broad pulses at twice line frequency (Figure 13.14). The field flyback lasts for 25 complete lines, giving a total field blanking time of 25 X 64 = 1600 J.s = 1.6 ms. In order to ensure contin- uous line synchronisation throughout the field blanking period, it is nec- essary for line triggering edges to occur where a line sync pulse normally appears. The 2 X line frequency broad pulses ensure this takes place. The extra edges during the field flyback are disregarded by the line oscillator. Before and after the five broad field pulses, five equalising pulses are inserted to ensure good interlacing.

Random pulses due to noise and other interference are sometimes present on the composite video signal. These pulses are similar to the sync pulses themselves and may trigger the timebase at the wrong time. In the case of the field timebase, the integrator which has a slow response removes most of the noise. However, a random pulse occurring near the end of a field causes what is known as frame or field slip. To avoid this, a noise gate (also known as a noise canceller) may be included to obtain a noise-free output from the sync separator. In the case of the line timebase, noise causes what is known as line tearing as some lines are displaced with respect to the oth- ers. On vertical objects, the effect of line tearing is illustrated by ragged edges. Line tearing may be avoided by the use of a flywheel synchronising circuit. The principle of flywheel synchronisation is similar to that of the mechanical flywheel which, due to its large momentum, maintains an aver- age speed unaffected by random changes. The flywheel sync circuit main- tains an average frequency of the sync pulses by monitoring and taking the average frequency of a number of incoming line pulses so that a random pulse will have very little effect on the frequency. A block diagram for a flywheel synchroniser is shown in Figure 13.15. It consists of a flywheel discriminator followed by a reactance stage which controls the fre- quency of the line oscillator. The flywheel discriminator itself consists of a phase comparator or discriminator and a smoothing circuit. A control voltage proportional to the timing, i.e. phase, between the line oscillator and the incoming sync pulse is obtained from the phase comparator. The voltage is then smoothed by the use of a low-pass filter. For good noise immunity, the flywheel discriminator should have slow response, which 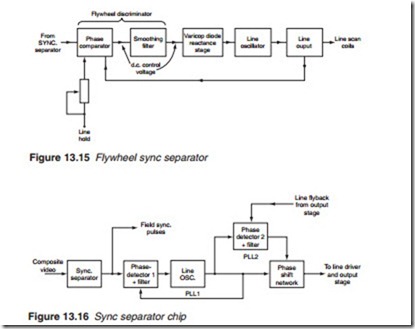 TI and the vendors who build DLP-based projectors have made strides in addressing this problem. The first-generation DLP projectors incorpo- rated a colour wheel that rotated 60 times per second, which can be des- ignated as 60 Hz, or 3600 RPM. So with one red, green and blue panel in the wheel, updates on each colour happened 60 times per second. This baseline 60 Hz rotation speed in the first-generation products is known as a ‘1X’ rotation speed.

Upon release of the first-generation machines, it became apparent that quite a few people were seeing rainbow artefacts. So in the second-generation DLP products the colour wheel rotation speed was doubled to 2 X at 120 Hz or 7200 RPM. The doubling of the colour refresh rate reduced the time between colour updates, and so reduced or eliminated the visibility of colour separation artefacts for most people.

Today, as noted above, many DLP projectors being built for the home theatre market incorporate a six-segment colour wheel which has two sets of red, green and blue filters. This wheel still spins at 120 Hz or 7200 RPM, but because red, green and blue are refreshed twice in every rotation rather than once, the industry refers to this as a 4X rotation speed. This further doubling of the refresh rate has again reduced the number of peo- ple who can detect them.

For the large majority of users the six-segment, 4X speed wheels have solved the problem for home theatre or video products. Meanwhile, due to the higher lumen output requirements for business presentation use, most commercial DLP units still use the four-segment, 2X speed wheels.