This simplest form of ac induction motor or asynchronous motor is the basic, universal workhorse of industry. Its general construction is shown in Fig. 10.7. It is usually designed for fixed-speed operation, larger ratings having such features as deep rotor bars to limit Direct on Line (DOL) starting currents. Electronic variable speed drive technology is able to provide the necessary variable voltage, current and frequency that the induction motor requires for efficient, dynamic and stable variable- speed control.

Modern electronic control technology is able not only to render the ac induction motor satisfactory for many modern drive applications but also to extend greatly its application and enable users to take advantage of its low capital and maintenance costs. More striking still, microelectronic developments have made possible the highly dynamic operation of induction motors by the application of flux vector control. The practical effect is that it is now possible to drive an ac induction motor in such a way as to obtain a dynamic performance in all respects better than could be obtained with a phase-controlled dc drive combination.

The stator winding of the standard industrial induction motor in the integral kilowatt range is three-phase and is sinusoidally distributed. With a symmetrical three-phase supply connected to these windings, the resulting currents set up, in the air-gap between the stator and the rotor, a travelling wave magnetic field of constant magnitude and moving at synchronous speed. The rotational speed of this field is f/p revolutions per second, where f is the supply frequency (hertz) and p is the number of pole pairs (a four-pole motor, for instance, having two pole pairs). It is more usual to express speed in revolutions per minute, as 60 f/p (rpm).

The emf generated in a rotor conductor is at a maximum in the region of maximum flux density and the emf generated in each single rotor conductor produces a current, the consequence being a force exerted on the rotor which tends to turn it in the direction of the flux rotation. The higher the speed of the rotor, the lower the speed of the rotating stator flux field relative to the rotor winding, and therefore the smaller is the emf and the current generated in the rotor cage or winding.

The speed when the rotor turns at the same rate as that of the rotating field is known as synchronous speed and the rotor conductors are then stationary in relation to the rotating flux. This produces no emf and no rotor current and therefore no torque on the rotor. Because of friction and windage the rotor cannot continue to rotate at synchronous speed; the speed must therefore fall and as it does so, rotor emf and current, and therefore torque, will increase until it matches that required by the losses and by any load on the motor shaft. The difference in rotor speed relative to that of the 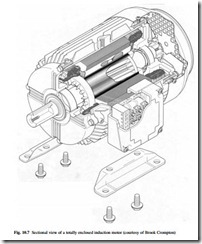 rotating stator flux is known as the slip. It is usual to express slip as a percentage of the synchronous speed. Slip is closely proportional to torque from zero to full load.

A disadvantage of the squirrel cage machine is its fixed rotor characteristic. The starting torque is directly related to the rotor circuit impedance, as is the percentage slip

This problem can be overcome to a useful extent for DOL application by designing the rotor bars with special cross sections as shown in Fig. 10.8 so that rotor eddy currents increase the impedance at starting when the rotor flux (slip) frequency is high. Alternatively, for special high starting torque motors, two or even three concentric sets of rotor bars are used. Relatively costly in construction but capable of a substantial improvement in starting performance, this form of design produces an increase in full load slip. Since machine losses are closely proportional to working speed slip, increased losses may require such a high starting torque machine to be derated.

The curves in Fig. 10.9 indicate squirrel cage motor characteristics. In the general case, the higher the starting torque the greater the full load slip. This is one of the important parameters of squirrel cage design as it influences the operating efficiency. 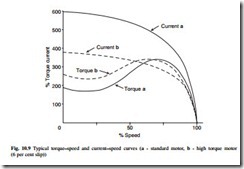 To convert a constant speed motor operating direct-on-line to a variable speed drive using an inverter it is necessary to consider the effect of frequency on flux and torque. The magnitude of the field created by the stator winding is controlled broadly by the voltage impressed upon the winding by the supply. This is because the resistance of the winding results in only a small voltage drop, even at full load current, and there- fore in the steady state the supply voltage must be balanced by the emf induced by the rotating field. This induced emf depends on the product of three factors:

● the total flux per pole, which is usually determined by the machine designer

● the total number of turns per phase in the stator winding

● the rate of field rotation or frequency

For inverter operation the speed of field rotation for which maximum voltage is appropriate is known as the base speed. The consequence of reducing the supply frequency can readily be deduced from the aforementioned relationship. For the same flux the induced emf in the stator winding will be proportional to frequency, hence the voltage supplied to the machine windings must be correspondingly reduced in order to avoid heavy saturation of the core. This is valid for changes in frequency over a wide range. The voltage–frequency relationship should therefore be linear if a constant flux is to be maintained within the machine, as the motor designer intended. If flux is constant, so is the motor torque for a given stator current, and the drive therefore has a constant- torque characteristic.

Although constant v/f control is an important underlying principle, it is appropriate to point out departures from it which are essential if a wide speed range is to be covered. First, operation above the base speed is easily achieved by increasing the out- put frequency of the inverter above the normal mains frequency; two or three times the base speed is easily obtained. The output voltage of an inverter cannot usually be made higher than its input voltage therefore the v/f characteristic is typically like that shown in Fig. 10.10(a). Since v is constant above base speed, the flux will fall as the frequency is increased after the output voltage limit is reached. In Fig. 10.10(b), the machine flux falls in direct proportion to the v/f ratio. Although this greatly reduces the core losses, the ability of the machine to produce torque is impaired and less mechanical load is needed to draw full load current from the inverter. The drive is said to have a constant-power characteristic above base speed. Many applications not requiring full torque at high speeds can make use of this extended speed range. Secondly, departure from constant v/f is beneficial at very low speeds, where the voltage drop arising from the stator resistance becomes significantly large. This voltage drop is at the expense of flux, as shown in Fig. 10.10(b). To maintain a truly constant flux within the machine the terminal voltage must be increased above the constant v/f value to compensate for the stator resistance effect. Indeed, as output frequency approaches zero, the optimum voltage becomes the voltage equal to the stator IR drop. Compensation for stator resist- ance is normally referred to as voltage boost and almost all inverters offer some form of adjustment so that the degree of voltage boost can be matched to the actual winding resistance. It is normal for the boost to be gradually tapered to zero as the frequency progresses towards base speed. Figure 10.10(c) shows a typical scheme for tapered boost. It is important to appreciate that the level of voltage boost should increase if a high starting torque is required, since in this case the IR drop will be greater by virtue of the increased stator current. In this case automatic load-dependent boost control is 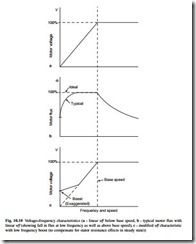 useful in obtaining the desired low speed characteristics. Such a strategy is referred to as constant v/f control and is a feature of most commercially available ac drives, though more advanced open-loop strategies are now becoming more available.

So far the techniques described have been based on achieving constant flux within the air-gap of the machine or, if that is not possible, then the maximum flux. Constant flux is the ideal condition if the highest torque is required because the load cannot be predicted with certainty, or if the most rapid possible acceleration time is desired.

A large number of inverters are used however for variable air volume applications where control of airflow is obtained by variable speed fans. The torque required by a fan follows a square law characteristic with respect to speed and reducing the speed of a fan by 50 per cent will reduce its torque requirement to 25 per cent. As the load is entirely predictable there is no need for full torque capability and hence flux to be maintained, and higher motor efficiency can be obtained by operating at a reduced flux level. A fur- ther benefit is that acoustic noise, a major concern in air conditioning equipment, is significantly reduced. It is therefore common for inverters to have an alternative square law v/f characteristic or, ideally, a self-optimizing economy feature so that rapid acceleration to meet a new speed demand is followed by settling to a highly efficient operating point. A loss of stability may result from such underfluxing with some control strategies.

High-performance operation of ac motors can be achieved by the use of flux vector control. A detailed explanation is beyond the scope of this book, but because this subject is prone to considerable misrepresentation, a few words of explanation may be helpful.

Here, vsx is the demand to the voltage source for flux-producing current and vsy is the demand to the voltage source for torque-producing current. These demands are fed through polar to rectangular (or quadrature to magnitude and phase) conversion using a calculated phase angle θref, of the rotor position with respect to the field. Unlike the dc motor controller it is not possible to measure directly the flux-producing and torque-producing currents and in flux vector control, these quantities have to be calculated from the measured motor currents, known applied voltages and motor parameters. The performance and quality of this form of control system is critically dependent upon the accuracy of the calculation of the phase angle, θref. If the rotor position is measured, as is the case in closed-loop flux vector systems, then the phase

angle can be calculated very precisely, and excellent flux and torque control is possible at frequencies including 0 Hz. Key performance measures include dynamics, where the performance of dc motors is easily exceeded, and torque linearity, which can be controlled within 2 per cent over the entire operating range in motoring and braking operation. In open-loop control systems, where there is no rotor speed or position measurement, the quality of the control system is critically dependent upon the performance of the phase angle estimator. Modern industrial systems have to balance performance with robustness in operation, and robustness when a standard controller is applied to different industrial motors.