A ﬁlter network for a high-voltage power supply typically consists of a series inductance and one or more shunt capacitances [3]. Bleeder resistors are also usually incorporated. Filter systems can be divided into two basic types:

• Inductive input, ﬁlter circuits that present a series inductance to the rectiﬁer output.

• Capacitive input, ﬁlter circuits that present a shunt capacitance to the rectiﬁer output.

An inductive input ﬁlter is shown in Figure 7.11, along with typical current waveforms [3]. When the input inductance is inﬁnite, current through the inductance is constant and is carried at any moment by the rectiﬁer anode that has the most positive voltage applied to it at that instant. As the alternating volt- age being rectiﬁed passes through zero, the current suddenly transfers from one anode to another, pro- ducing square current waves through the individual rectiﬁer devices.

The output wave of the rectiﬁer can be considered as consisting of a dc component upon which are superimposed ac voltages (ripple voltages). To a ﬁrst approximation, the ﬂuctuation in output current resulting from a ﬁnite input inductance can be considered as the current resulting from the lowest fre- quency component of the ripple voltage acting against the impedance of the input inductance. This assumption is permissible because the higher frequency components in the ripple voltage are smaller and at the same time encounter higher impedance. Furthermore, in practical ﬁlters, the shunting capacitor 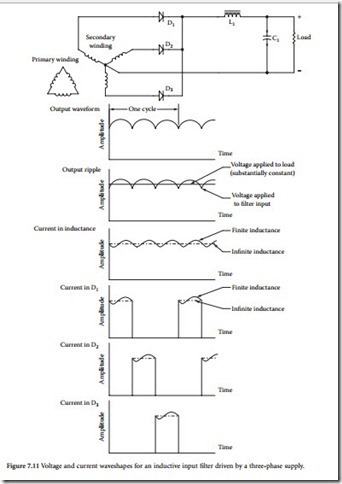 This equation is derived as follows:

• The peak alternating current through the input inductance is approximately E1/ω L1.

• The average or dc current is E0/Reff.

• The current with inﬁnite inductance is E0/Reff.

In a polyphase system, the required value of L1 is signiﬁcantly less. The higher the load resistance (the lower the dc load current), the more difﬁcult it is to maintain a continuous ﬂow of current, and with a given L1, the previous equation will not be satisﬁed when the load resistance exceeds a critical value.

The minimum allowable input inductance (ω L1) is termed the critical inductance. When the inductance is less than the critical value, the ﬁlter acts as a capacitor input circuit. When the dc drawn from the rectiﬁers varies, it is still necessary to satisfy the ω L1 equation at all times, particularly if good voltage regulation is to be maintained. To accomplish this requirement at small load currents without excessive inductance, it is necessary to place a bleeder resistance across the output of the ﬁlter system in order to limit Reff to a value corresponding to a reasonable value of L1.

When a shunt capacitance rather than a series inductance is presented to the output of a rectiﬁer, the behavior of the circuit is greatly modiﬁed [3]. Each time the positive crest alternating voltage of the trans- former is applied to one of the rectiﬁer anodes, the input capacitor charges up to just slightly less than

The addition of a shunt capacitor to the input of a ﬁlter thus produces fundamental changes in behavior, including:

• The output voltage is appreciably higher than with an inductance input.

• The dc voltage across the ﬁlter input drops as the load current increases for the capacitive-input case, instead of being substantially constant, as for the inductive input case.

• The ratio of peak-to-average anode current at the rectiﬁers is higher in the capacitive case.

• The utilization factor of the transformer is lower with a capacitive input conﬁguration. 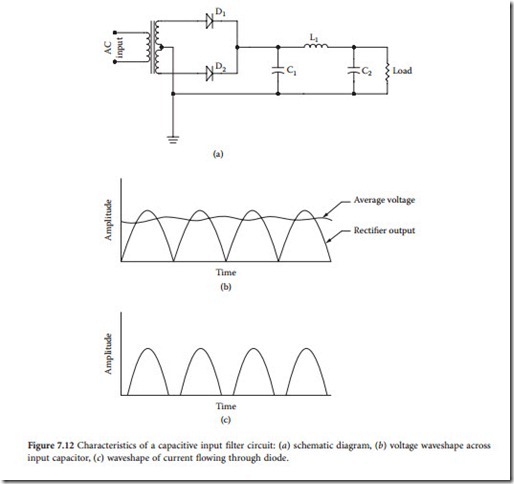 Filters incorporating shunt capacitor inputs are generally employed when the amount of dc power required is small. Inductance input ﬁlters are used when the amount of power involved is large; the higher utilization factor and lower peak current result in important savings in rectiﬁer and transformer costs under these conditions. Inductance input systems are almost universally employed in polyphase rectiﬁer applications.