Electromagnetic Compatibility (EMC) is achieved when co-located equipment and systems operate satisfactorily, without malfunction, in the presence of electromagnetic disturbances. For example, the electrical noise generated by motor-driven household appliances, if not properly controlled, is capable of causing interference to domestic radio and TV broadcast reception. Equally, microprocessor-based electronic control systems need to be designed to be immune to the electromagnetic fields from hand-held radio communication transmitters, if the system is to be reliable in service. The issues covered by EMC are quality of life, spectrum utilization, and operational reliability, through to safety of life, where safety-related systems are involved.

The electromagnetic environment in which a system is intended to operate may comprise a large number of different disturbance types, emanating from a wide range of sources including:

● mains transients due to switching

In addition to having adequate immunity to all these disturbances, equipment and systems should not adversely add electromagnetic energy to the environment above the level that would permit interference-free radio communication and reception.

The essence of all EMC situations is contained in the simple source, path, receptor model shown in Fig. 14.1.

Sources comprise electromechanical switches, commutator motors, power semi- conductor devices, digital logic circuits and intentional radio frequency generators. The electromagnetic disturbances they create can be propagated via the path to the receptor, such as a radio receiver, which contains a semiconductor device capable of responding to the disturbance, and causing an unwanted response, i.e. interference.

For many equipments and systems, EMC requirements now form part of the over- all technical performance specification. The EU’s EMC Directive, 89/336/EEC, was published in 1992 and came into full implementation on 1 January 1996. All apparatus placed on the market or taken into service must, by law, comply with the Directive’s essential requirements, that is it must be immune to electromagnetic disturbance representative of the intended environment and must generate its own disturbance at no greater than a set level that will permit interference-free radio communication. The Directive refers to relevant standards which themselves define the appropriate immunity levels and emission limits. More information on the EMC Directive and its ramifications is available in reference 14H.

The path by which electromagnetic disturbance propagates from source to receptor comprises one or more of the following:

Coupling by conduction can occur where there is a galvanic link between the two circuits, and dominates at low frequencies where the conductor impedances are low. Capacitance and inductive coupling takes place usually between reasonably long co-located parallel cable runs. Radiation dominates where conductor dimensions are comparable with a wavelength at the frequency of interest, and efficient radiation occurs.

For example, with a personal computer, the radiation path is more important for both emission and immunity at frequencies above 30 MHz, where total cable lengths are of the order of several metres. Designers and installers of electrical and electronic equipment need to be aware that all three coupling methods exist so that the equipment can be properly configured for compatibility.

For many EMC situations, such as coupling by radiation, effective prediction and analysis are achieved by reference to simple mathematical expressions. For nearly all products experiencing EMC problems, the equipment will work perfectly in 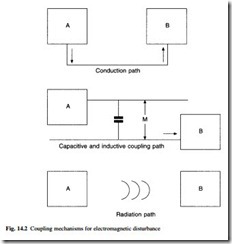 the development laboratory and only when it is subjected to external electromagnetic disturbance do other facets of its characteristics emerge. Under these circumstances, circuit conductors are considered as antennas capable of both transmitting and receiving radio energy. The circuit can usually be assessed as either a short monopole antenna, for instance where one end of the conductor is terminated in a high impedance, or as a loop where both ends are terminated in a low impedance.

For the monopole equivalent at low frequencies and at distances greater than a wavelength, the field strength E, at distance d (in metres) is given by eqn 14.1:

where I is the current in amperes, h is the length of the conductor and λ is the wave- length (= 300 ÷ frequency in megahertz), both in metres. It can be seen that the field strength is greater for shorter distances and higher frequencies (shorter wavelengths).

For loop radiators at low frequencies, the field is given by eqn 14.2:

where n is the number of turns and A is the area of the loop. The field strength is greater at shorter distances and higher frequencies.

At high frequencies where the conductor lengths are comparable with a wavelength, a good approximation of the field at a distance can be taken if the source is considered as a half-wave dipole. The field is then given by eqn 14.3:

where P is the power in watts available in the circuit.

To estimate the degree of coupling in the radiated path, empirical data give values of induced currents of about 3 mA for an incident electromagnetic wave of 1 V/m. This relationship can be used to good effect in converting the immunity test levels in the standards into an engineering specification for induced currents impressed at an input port due to coupling via an attached cable.