Experience has shown that capacitor failures are second only to semiconductors and vacuum tubes in components prone to malfunction in electronic equipment. Capacitors for ac applications range from high-voltage oil-filled devices, such as the one shown in Figure 5.5, to low voltage, high capacitance devices of the type typically found in power supplies (both linear and switching). Of all the various types of capacitors used today, it is estimated that electrolytics present the greatest potential for problems to equipment users.

Electrolytic capacitors are popular because they offer a large amount of capacitance in a small physical size. They are widely used as filters in low-voltage power supplies and as coupling devices in audio and RF stages. An aluminum electrolytic capacitor consists of two aluminum foil plates separated by a porous strip of paper (or other material) soaked with a conductive electrolyte solution. Construction of a typical device is illustrated in Figure 5.6. The separating material between the capacitor plates does not form the dielectric but, instead, serves as a spacer to prevent the plates from mechanically short-circuiting. The dielectric consists of a thin layer of aluminum oxide that is electrochemically formed on the positive foil plate. The electrolyte conducts the charge applied to the capacitor from the negative plate, through the paper spacer, and into direct contact with the dielectric. This sandwich arrangement of foil-spacer-foil is then rolled up and encapsulated. 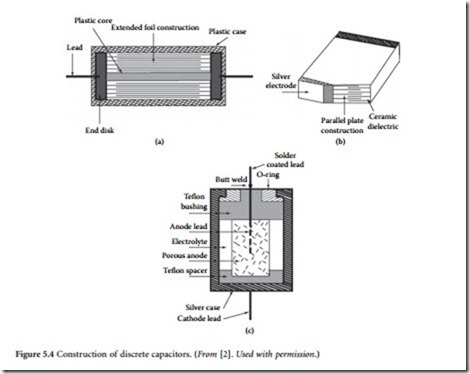 Mechanical failures relate to poor bonding of the leads to the outside world, contamination during manufacture, and shock-induced short-circuiting of the aluminum foil plates. Typical failure modes include short circuits caused by foil impurities, manufacturing defects (such as burrs on the foil edges or tab connections), breaks or tears in the foil, and breaks or tears in the separator paper.

Short circuits are the most frequent failure mode during the useful life period of an electrolytic capacitor. Such failures are the result of random breakdown of the dielectric oxide film under normal stress. Proper capacitor design and processing will minimize such failures. Short circuits also can be caused by excessive stress, where voltage, temperature, or ripple conditions exceed speci- fied maximum levels.

Open circuits, although infrequent during normal life, can be caused by failure of the internal connections joining the capacitor terminals to the aluminum foil. Mechanical connections can develop an oxide film at the contact interface, increasing contact resistance and even- 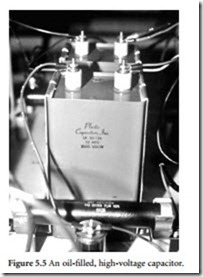 Capacitors are subject to failures induced by thermal cycling. Experience has shown that thermal stress is a major contributor to failure in aluminum electro- lytic capacitors. Dimensional changes between plas- tic and metal materials can result in microscopic ruptures at termination joints, possible electrode oxidation, and unstable device termination (changing series resistance). The highest-quality capacitor will fail if its voltage or current ratings are exceeded. Appreciable heat rise (20°C during a 2-hour period of applied sinusoidal voltage) is considered abnor- mal and may be a sign of incorrect application of the component or impending failure of the device. 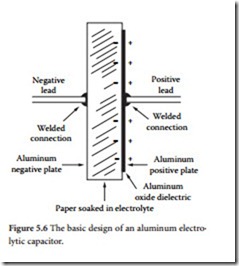 temperature on capacitor life. Note that operation at 33% duty cycle is rated at 10 years when the ambient temperature is 35°C, but the life expectancy drops to just 4 years when the same device is operated at Paper soaked in electrolyte 55°C. A common rule of thumb is this: Within the range of + 75°C through the full-rated temperature, stress and failure rates double for each 10°C increase in operating temperature. Conversely, the failure rate is reduced by half for every 10°C decrease in operating temperature. 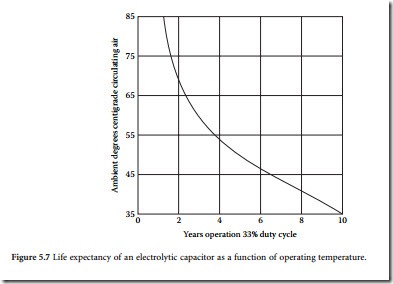 As a capacitor dries out, three failure modes may be experienced: leakage, a downward change in value, or dielectric absorption. Any one of these can cause a system to operate out of tolerance or fail altogether.

The most severe failure mode for an electrolytic is increased leakage, illustrated in Figure 5.8. Leakage can cause loading of the power supply or upset the dc bias of an amplifier. Loading of a supply line often causes addi- tional current to flow through the capacitor, possibly resulting in dangerous overheating and catastrophic fail- ure. 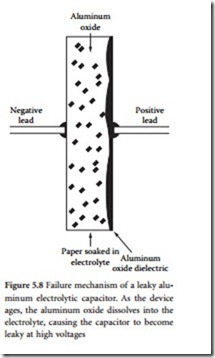 A change of device operating value has a less devas- tating effect on system performance. An aluminum elec- trolytic has a typical tolerance range of about ± 20%. A capacitor suffering from drying of the electrolyte can experience a drastic drop in value (to just 50% of its rated value, or less). The reason for this phenomenon is that after the electrolyte has dried to an appreciable extent, the charge on the negative foil plate has no way of coming in contact with the aluminum-oxide dielectric. This failure Paper soaked in electrolyte

mode is illustrated in Figure 5.9. Remember, it is the alu- minum-oxide layer on the positive plate that gives the electrolytic capacitor its large rating. The dried-out paper spacer, in effect, becomes a second dielectric, which signif- icantly reduces the capacitance of the device.

The life expectancy of a capacitor — operating in an ideal circuit and environment — will vary greatly, depending upon the grade of device selected. Typical operating life, according to capacitor manufacturer data sheets, range from a low of 3 to 5 years for inexpensive electrolytic devices, to a high of greater than 10 years for computer- grade products. Catastrophic failures aside, expected life is a function of the rate of electrolyte loss by means of vapor transmission through the end seals, and the operating or storage temperature. Properly matching the capacitor to the application is a key component in extending the life of an electrolytic capacitor. The primary operating parame- ters include: 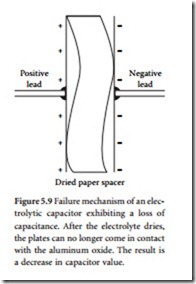 • Rated voltage — the sum of the dc voltage and peak ac voltage that can be applied continuously to the capacitor. Derating of the applied voltage will decrease the failure rate of the device.

• Ripple current — the rms value of the maximum allowable ac current, specified by product type at 120 Hz and +85°C (unless otherwise noted). The ripple current may be increased when the component is operated at higher frequencies or lower ambient temperatures. 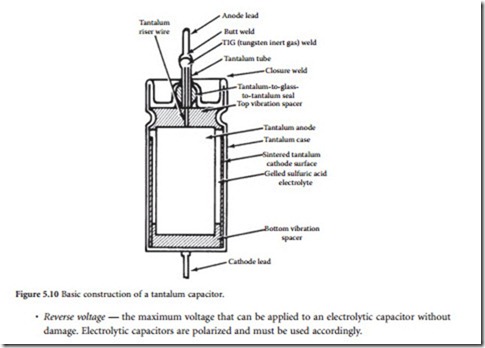 Motors and Generators:AC Generators
Capacitor Application:Failure Modes and Case Ruptures
Capacitor Application:Grounding
Capacitor Application:Fusing and Protection
Fundamentals of Distribution Systems
Engine installation:Stationary engines
Starting and generating systems:Starter circuits
AN INTRODUCTION TO ELECTRICITY GENERATION:EVOLUTION OF ELECTRICITY NETWORKS
ELECTRICITY GENERATION AND THE ENVIRONMENT:LIFE-CYCLE ASSESSMENT
COMBINED HEAT AND POWER:COMBINED HEAT AND POWER PRINCIPLES AND APPLICATIONS
POWER FROM WASTE:WASTE PLANT EMISSIONS
The Current Situation and Perspectives on the Use of Biomass in the Generation of Electricity:Lookin...
The Current Situation and Perspectives on the Use of Nuclear Energy for Electricity Generation:The E...
Impact of Large Penetration of Correlated Wind Generation on Power System Reliability:Correlated Tim...
Adopting the IEC Common Information Model to Enable Smart Grid Interoperability and Knowledge Repres...