Some of the important types of such motors are given below :

3. Single-voltage reversible and with thermostat type

Many motors are fitted with a device called thermostat which provides protection against over- load, overheating, and short-circuits etc. The thermostat usually consists of a bimetallic element that is connected in series with the motor and is often mounted on the outside of the motor.

The wiring diagram of a capacitor-start motor fitted with this protective device is shown in Fig.

36.17. When due to some reasons, excessive current flows through the motor, it produces abnormal heating of the bimetallic strip with the result that it bends and opens the contact points thus disconnecting the motor from the supply lines. When the thermostat element cools, it automatically closes the contacts*.

In the case of capacitor-start motors used for refrigerators, generally a terminal block is attached to the motor. Three out of the four block terminals are marked T, TL and L as shown in Fig. 36.18. Thermostat is connected to T and T L, capacitor between L and the unmarked terminal and the supply lines to TL and L.

Such motors are commonly used in refrigerators where it is not possible to use a centrifugal switch. The circuit diagram is similar to that shown in Fig. 36.6. Since their application requires just one direction of rotation, these motors are not connected for reversing.

One disadvantage of a capacitor-start motor having magnetic switch lies in the possibility that slight overloads may operate the plunger thereby connecting the starting winding circuit to the sup- ply. Since this winding is designed to operate for very short periods (3 seconds or less) it is likely to be burnt out.

These motors can be operated from two a.c. volt- age either 110 V and 220 V or 220 V and 440 V. Such motors have two main windings (or one main winding in two sections) and one starting winding with suitable number of leads brought out to permit changeover from one volt- age to another.

When the motor is to operate from lower voltage, 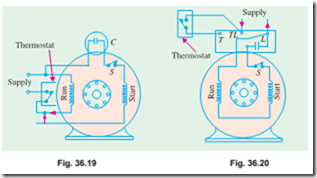 the two main windings are connected in parallel (Fig. 36.19). Whereas for higher voltage, they are connected in series (Fig. 34.20). As will be seen from the above circuit diagrams, the starting wind- ing is always operated on the low-voltage for which purpose it is connected across one of the main windings.

External reversing is made possible by means of two additional leads that are brought out from the starting winding.

Fig. 36.21 and 36.22 show connections for clockwise and anticlockwise rotations respectively when motor is operated from lower voltage. Similar wiring diagram can be drawn for higher voltage supply.

In such motors, a two-section running winding is used. The two sections R1 and R2 are internally connected in series and one lead of the starting winding is connected to the mid-point of R1 and R2.

Normally, a motor must be brought to complete rest before it can be started in the reverse direction. It is so because the centrifugal switch cannot close unless the motor has practically stopped. Since starting winding is disconnected from supply when the motor is running, reversal of starting winding leads will not affect the operation of the motor. This reversal is achieved by a triple-pole, double-throw (TPDT) switch as shown in Fig. 36.24. The switch consists of three blades or poles which move together as one unit in either of the two positions. In one position of the switch (shown in one figure) motor runs clockwise and in the other, in counter-clockwise direction. Obviously, in this type of arrangement, it is necessary to wait till motor stops.

In certain applications where instant reversal is necessary while the motor is operating at full speed, a relay is fitted in the circuit to short-circuit the centrifugal switch and connect the starting winding in the circuit in the reversed direction (Fig. 36.25).

It will be seen that when at rest, the double-contact centrifugal switch is in the `start’ position. In this position, two connections are made :

During the fraction-of-a-second interval while TPDT switch is shifted from ‘forward’ to ‘re- verse’ position, no current flows through the relay coil as a result of which the relay contacts close. When TPDT switch reaches the ‘reverse’ position, current flows through the now-closed relay contacts to the starting winding but in opposite direction. This produces a torque which is applied in a direction opposite to the rotation. Hence, (i) rotor is immediately brought to rest and (ii) centrifugal switch falls to the ‘start’ position. As before, C is put in series with the starter winding and the motor starts rotating in the opposite direction.

Speed can be changed by changing the number of poles in the winding for which purpose two separate running windings are placed in the slots of the stator, one being 6-pole winding and the other, 8-pole winding. Only one starting winding is used which always acts in conjunction with the higher- speed running winding. The double-action or transfer type centrifugal switch S has two contact

points on the ‘start’ side and one on the ‘run’ side. As shown in Fig. 36.26, an external speed switch is used for changing the motor speed. The motor will always start on high speed irrespective of whether the speed switch is on the ‘high’ or ‘low’contact. If speed switch is set on ‘low’, then as soon as the motor comes up to speed, the centrifugal switch

(b) cuts in the low-speed running winding.