As discussed above, a single-phase induction motor is not self-starting. To overcome this drawback and make the motor self-starting, it is temporarily converted into a two-phase motor during starting period. For this purpose, the stator of a single-phase

motor is provided with an extra winding, known as starting (or auxiliary) winding, in addition to the main or running winding. The two windings are spaced 90º electrically apart and are connected in parallel across the single-phase supply as shown in Fig. 36.4.

It is so arranged that the phase-difference between the currents in the two stator windings is very large (ideal value being 90º). Hence, the motor behaves like a two- phase motor. These two currents produce a revolving flux and hence make the motor self-starting.

There are many methods by which the necessary phase-difference between the two currents can be created. 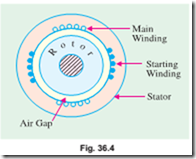 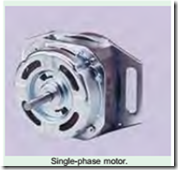 In the case of split-phase motors that are hermetically sealed in refrigeration units, instead of internally-mounted centrifugal switch, an electromagnetic type of relay is used. As shown in Fig. 36.6, the relay coil is connected in series with main winding and the pair of contacts which are normally open, is included in the starting winding.

During starting period, when Im is large, relay contacts close thereby allowing Is to flow and the motor starts as usual. After motor speeds up to 75 per cent of full-load speed, Im drops to a value that is low enough to cause the contacts to open.

A typical torque/speed characteristic of such a motor is shown in Fig. 36.7. As seen, the starting torque is 150 to 200 per cent of the full-load torque with a starting current of 6 to 8 times the full-load current. These motors are often used in preference to the costlier capacitor-start motors. Typical applications are : fans and blowers, centrifugal pumps and separators, washing machines, small machine tools, duplicating machines and domestic refrigerators and oil burners etc. Commonly available sizes range from 1/20 to 1/3 h.p. (40 to 250 W) with speeds ranging from 3,450 to 865 r.p.m.

As shown in Fig. 36.8, the direction of rotation of such motors can be reversed by reversing the connections of one of the two stator windings (not both). For this purpose, the four leads are brought outside the frame.

As seen from Fig. 36.9, the connections of the starting winding have been reversed.

The speed regulation of standard split-phase motors is nearly the same as of the 3-phase motors. Their speed varies about 2 to 5% between no load and full-load. For this reason such motors are usually regarded as practically constant-speed motors.

Note. Such motors are sometimes referred to as resistance-start split-phase induction motors in order to distinguish them from capacitor-start induction run and capacitor start-and-run motors described later.

(ii) Capacitor-start Induction-run motors. In these motors, the necessary phase difference between Is and Im is produced by connecting a capacitor in series with the starting winding as shown in Fig. 36.10. The capacitor is generally of the electrolytic type and is usually mounted on the outside of the motor as a separate unit (Fig. 36.11).

The capacitor is designed for extremely short-duty service and is guaranteed for not more than 20 periods of operation per hour, each period not to exceed 3 seconds. When the motor reaches about 75 per cent of full speed, the centrifugal switch S opens and cuts out both the starting winding and the capacitor from the supply, thus leaving only the running winding across the lines. As shown in Fig. 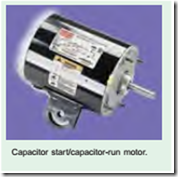 36.12, current Im drawn by the main winding lags the supply voltage V by a large angle whereas Is leads V by a certain angle. The two currents are out of phase with each other by about 80º (for a 200-W 50-Hz motor) as compared to nearly 30º for a split-phase motor. Their resultant current I is small and is almost in phase with V as shown in Fig. 36.12. 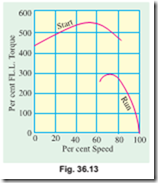 Since the torque developed by a split-phase motor is proportional to the sine of the angle between Is and Im , it is obvious that the increase in the angle (from 30º to 80º) alone increases the starting torque to nearly twice the value developed by a standard split- phase induction motor. Other improvements in motor design have made it possible to increase the starting torque to a value as high as 350 to 450 per cent.

Typical performance curve of such a motor is shown in Fig. 36.13.