The progressive introduction of small-scale distributed generation (DG) is now a major issue for distribution networks. These networks, which have been designed for one-way-traffic of energy from transmission levels down to consumers, may have to be modified to accept the possibility of reversed flow caused by the DG exceeding local demand. This has a significant impact on the protection systems required.

It will be noted from Fig. 13.7 that the primary and low-voltage distribution systems are connected in a radial configuration. Circuit loops between adjacent substations are avoided because these can lead to circulating currents, which may increase the power losses and create difficulty in protection schemes. However, tie circuits between adjacent lines and cables are available to reconfigure the network when a portion of the low-voltage circuit is out of service for maintenance or because of failure. These tie circuits are controlled by a normally open switch which can be closed manually within a few minutes, although an increasing trend is for automation of this operation by Supervisory Control and Data Acquisition (SCADA) systems.

In urban and suburban areas, much of the primary and low-voltage distribution system is underground, with readily accessible substations sited in cellars or on small secure plots. Industrial sites may also have a number of substations incorporated into buildings or secure areas; these may be controlled by the works engineer or operated and maintained by an electricity distribution company.

In rural areas and in more dispersed suburban areas, many three-phase overhead lines operating at 10–15 kV or 27–33 kV are supported for many miles on poles which

may be of wood, concrete or steel lattice. The 380–415 V three-phase supply is taken from these lines through a small pole-mounted fused input/output transformer. If the maximum load to be taken is below about 50 kW, the supplies for homes or farmsteads may be derived from a single-phase 10–15 kV supply. Typically, a rural primary distribution system supplies up to 50 step-down transformers spread over a wide region. The lines in such a system are vulnerable to damage by tree branches, snow and ice accumulation and lightning strikes and it therefore has lower reliability than underground systems in urban areas. Considerable ingenuity has been applied to protection of this type of system with the use of auto-reclosing supply circuit breakers and automatic reconnection switches, which are described in section 7.4.2.2.

It is now a common practice in developed countries to monitor the primary distribution system down to 10–15 kV and to display alarm, voltage and power-flow conditions in a control room; and in the event of an incident, repair crews are despatched quickly. Repairs to the low-voltage system are still dependent, however, on consumers notifying a loss of supply.

The proper earthing of distribution systems is of prime importance in order that excessive voltages do not appear on connections to individual consumers. It is the practice in UK and some other countries to connect to earth the neutral conductor of the four-wire system and the star point of the low-voltage winding on the step-down transformer, not only at the transformer secondary output but also at every load point with a local meter and protective fuse. This is known as the Protective Multiple Earth (PME) system, which is described in relation to cable technology in section 9.3.1.3. It is designed to ensure that all metallic covers and equipment fed from the supply are bonded so that dangerously high voltages do not hazard lives.

It is essential that a distribution system is economical in operation and easy to repair, and its design should enable reconnection of a consumer through adjacent feeders to supply substations in the event of failure or outage of part of the system.

Copper or aluminium conductors with a cross section of 150 mm2 to 250 mm2 are typically used at the lowest voltages, and these are arranged so that the maximum volt- age drop under the heaviest load conditions is no more than 6 per cent; alternatively the voltage at the connection to every consumer must not rise more than 6 per cent under light load conditions. Local adjustment is achieved by off-load tapchanging (usually ± 2.5 per cent or ± 5 per cent), and voltage in the primary circuits (usually 11 kV and 33 kV in the UK) is controlled by on-load tapchangers under Automatic Voltage Control. The construction and operation of tapchangers is described in more detail in section 6.2.5. Reinforcement or extension on the LV network is usually arranged through the installation of a new primary feed point with a transformer, rather than by upgrading the LV network.

Overhead lines are usually of a simple flat three-phase configuration which avoids conductor clashing in high winds and ice precipitation. An example is shown in Fig. 7.20. Impregnated wood poles are normally used. These provide some degree of 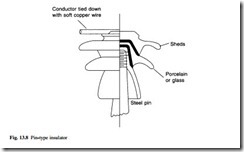 insulation to ground, and they can be quickly replaced in the event of collapse or decay. Insulators are usually of the cap-and-pin type, an example of which is illustrated in Fig. 13.8. Surge diverters and arcing horns provide a considerable measure of over- voltage protection, particularly where many kilometres of exposed line are fed from a primary substation. Arcing horns consist of a carefully positioned air gap between each conductor and earth. They are designed to flash over at a particular voltage when a potentially dangerous surge occurs on the system. Since there is no provision for extinguishing the resulting arc in this event, it is preferable, although more expensive, to provide a surge diverter at strategic positions in the overhead system. A surge diverter consists of a zinc oxide resistance between the live conductor and earth; this presents a very high resistance at normal voltages, but a low value at overvoltages, thereby conducting surge current safely to earth.

Primary substations consist usually of two or three step-down tapchanging trans- formers, with common busbars which may be duplicated for reliability and circuit separation. Remotely controlled interconnecting circuit breakers are installed to provide operating flexibility. Such substations are continuously monitored and metered, the data being brought back to a distribution control centre for display and archiving. A modern tendency is to reduce the number of control centres and to increase the geographical area covered by each through the use of computers and clever alarm handling and by analysis with powerful software which may in the future incorporate artificial intelligence.

The most important requirement in distribution control is good communication with district personnel and maintenance crews in order to ensure that maintenance and repair is efficiently, safely and swiftly carried out. Ready telephone access by the public and other consumers is also necessary so that dangerous situations or supply failures can be easily reported to engineers and technicians in the field.

The main task of the distribution controller is, therefore, to monitor equipment alarms and to ensure that rapid and effective action is taken. Schedules of equipment outages and maintenance have to be planned and effected with the minimum of disruption to consumers.