As identified by Key in his Naval Facilities study, the extent of lightning activity in an area significantly affects the probability of equipment failure caused by transient activity. The threat of a lightning flash to a facility is determined, in large part, by the type of installation and its geographic location. The type and character of the lightning flash are also important factors.

The structure of a facility has a significant effect on the exposure of equipment to potential lightning damage. Higher structures tend to collect and even trigger localized lightning flashes. Because storm clouds tend to travel at specific heights above the earth, conductive structures in mountainous areas more readily attract lightning activity. The plant exposure factor is a function of the size of the facility and the Isokeraunic rating of the area. The larger the physical size of an installation, the more likely it is to be hit by lightning during a storm. The longer a transmission line (ac or RF), the more lightning flashes it is likely to receive.

The relative frequency of power problems is seasonal in nature. As shown in Figure 11.3, most problems are noted during June, July, and August. These high problem rates can be traced primarily to increased thunderstorm activity. 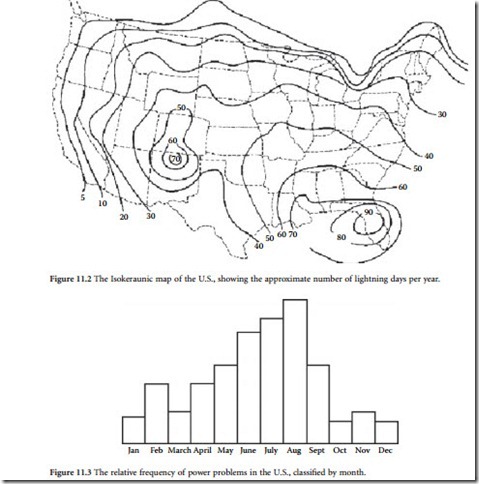