Guyed towers are better than self-supporting towers at dissipating lightning surge currents [1]. This is true, however, only if the guy anchors are grounded properly. Use of the Ufer technique is one way of effectively grounding the anchors. For anchors not provided with a Ufer ground during construction, other, more con- ventional techniques can be used. For guyed towers whose guy lines are not electrically continuous between the tower and the base, such as sectionalized towers (certain FM and TV broadcast towers and AM broadcast towers), surge current dissipation is essentially equivalent to a self-supporting tower.

Never rely on the turnbuckles of a guy anchor as a path for lightning energy. The current resulting from a large flash can weld the turnbuckles in position. If the turnbuckles are provided with a safety loop of guy cable (as they should be), the loop can be damaged where it contacts the guys and turnbuckle. Figure 19.1 shows the preferred method of grounding guy wires: tie them together above the loop and turnbuckles. Do not make these connections with copper wire, even if they are Cadwelded. During periods of precipitation, water shed from the top copper wire will carry ions that may react with the lower galvanized (zinc) guy wires. This reaction washes off the zinc coating, allowing rust to develop.

The best way to make the connection is with all-galvanized materials. This includes the grounding wire, clamps, and ground rods. It may not be possible to use all galvanized materials because, at some point, a connection to copper conductors will be required. Battery action caused by the dissimilar metal junction may allow the zinc to act as a sacrificial anode. The zinc eventually will disappear into the soil, leaving a bare steel conductor that can fall victim to rust.

Ruling out an all-galvanized system, the next best scheme uses galvanized wire (guy-wire material) to tie the guy wires together. Just above the soil, Cadweld the galvanized wire to a copper conductor that pene- trates below grade to the perimeter ground system. The height above grade for the connection is determined by the local snowfall or flood level. The electric conductivity of snow, although low, can cause battery action from the copper through the snow to the zinc. The Cadwelded joint should be positioned above the usual snow or flood level.

Figure 19.2 illustrates the proper way to bond the tower base ground leads to the buried ground system [1]. Dress the leads close to the tower from the lowest practical structural element at the base. Keep the conduc- tors as straight and short as possible. Avoid any sharp bends. Attach the ground wires to the tower only at one or more existing bolts (or holes). Do not drill any holes into the tower. Do not loosen any bolts to make the ground-wire attachment. Use at least two 3- to 4-in. copper straps between the base of the tower and the buried ground system. Position the straps next to the concrete pier of the tower base. For towers more than 200 ft in height, use four copper straps, one on each side of the pier.

Figure 19.3 illustrates the proper way to bond guy wires to the buried ground system. The lead is dressed straight down from the topmost to the lowest guy. It should conform as close to vertical as possible and be dressed downward from the lower side of each guy wire after connecting to each wire (Figure 19.1). To ensure that no arcing will occur through the turnbuckle, a connection from the anchor plate to the perimeter ground circle is recommended. No. 2 gauge copper wire is recommended. This helps minimize 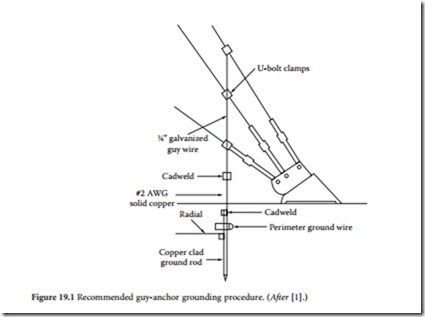 the unavoidable inductance created by the conductor being in the air. Interconnect leads that are suspended in air must be dressed so that no bending radius is less than 8 in.

A perimeter ground — a circle of wire connected at several points to ground rods driven into the earth — should be installed around each guy-anchor point. The perimeter system provides a good ground for the anchor and, when tied together with the tower base radials, acts to rapidly dissipate lightning energy in the event of a flash. Tower base radials are buried wires interconnected with the tower base ground that extend away from the center point of the structure.

The required depth of the perimeter ground and the radials depends upon soil conductivity. Generally speaking, however, about 8 in. below grade is sufficient. In soil with good conductivity, the perimeter wire may be as small as no. 10 gauge. Because no. 2 gauge is required for the segment of conductor suspended in air, it may be easier to use no. 2 throughout. An added advantage is that the same size Cadweld molds may be used for all bonds.

Rectifier and Filter Circuits:Power Supply Filter Circuits.
Power quality and electromagnetic compatibility:Signal waveforms and spectra.
The power system:Transmission.
Fuses and protection relays:Fuses
Fuses and protection relays:Protection and co-ordination.
Transformers:Standards.
Medium-Voltage Switchgear and Circuit Breakers:Electrical Switchgear Maintenance and Care
Capacitor Application:Fusing and Protection
Underground Distribution:Installations and Configurations
Electronic management systems:Caterpillar EMS
MARINE POWER GENERATION TECHNOLOGIES:WAVE POWER
POWER FROM WASTE:TRADITIONAL WASTE INCINERATION PLANTS
The Current Situation and Perspectives on the Use of Biomass in the Generation of Electricity:Spain
The Current Situation and Perspectives on the Use of Nuclear Energy for Electricity Generation:Safet...
Summary and Future Trend of A Review of Interconnection Rules for Large-Scale Renewable Power Genera...