The attention given to the design and installation of a facility ground system is a key element in the day-to- day reliability of the plant. A well-designed and -installed ground network is invisible to the engineering staff. A marginal ground system, however, will cause problems on a regular basis. Grounding schemes can range from simple to complex, but any system serves three primary purposes:

Most engineers view grounding mainly as a method to protect equipment from damage or malfunction. However, the most important element is operator safety. The 120 or 208 Vac line current that powers most equipment can be dangerous — even deadly — if handled improperly. Grounding of equipment and structures provides protection against wiring errors or faults that could endanger human life.

Proper grounding is basic to protection against ac line disturbances. This applies whether the source of the disturbance is lightning, power-system switching activities, or faults in the distribution network. Proper grounding is also a key element in preventing radio frequency interference in transmission or computer equipment. A facility with a poor ground system can experience RFI problems on a regular basis. Implementing an effective ground network is not an easy task. It requires planning, quality components, and skilled installers. It is not inexpensive. However, proper grounding is an investment that will pay dividends for the life of the facility.

Any ground system consists of two key elements: (1) the earth-to-grounding electrode interface outside the facility, and (2) the ac power and signal-wiring systems inside the facility.

A facility can be defined as something that is built, installed, or established to serve a particular purpose [1]. A facility is usually thought of as a single building or group of buildings. The National Electrical Code (NEC) uses the term premises to refer to a facility when it defines premises wiring as the interior and exterior (facility) wiring, such as power, lighting, control, and signal systems. Premises wiring includes the service and all permanent and temporary wiring between the service and the load equipment. Premises wiring does not include wiring internal to any load equipment.


The Need for Grounding

System grounding, which is also illustrated in Figure 18.1, is the process of intentionally connecting one of the current-carrying conductors of the electrical distribution system to ground [5]. The figure shows the neutral conductor intentionally connected to ground and the earth. This conductor is called the grounded conductor because it is intentionally grounded. The purpose of system grounding is overvoltage control and equipment safety through fault isolation. An ungrounded system is subject to serious overvoltages under conditions such as intermittent ground faults, resonant conditions, and contact with higher voltage systems. Fault isolation is achieved by providing a low-impedance return path from the load back to the source, which will ensure operation of overcurrent devices in the event of a ground fault. The system ground connection makes this possible by connecting the equipment grounding system to the low side of the voltage source. Methods of system grounding include solidly grounded, ungrounded, and impedance- grounded.

Solidly grounded means that an intentional zero-impedance connection is made between a cur- rent-carrying conductor and ground. The single-phase (1φ) system shown in Figure 18.1 is solidly grounded. A solidly grounded, three-phase, four-wire, wye system is illustrated in Figure 18.2. The neutral is connected directly to ground with no impedance installed in the neutral circuit. The NEC permits this connection to be made at the service entrance only [6]. The advantages of a solidly grounded wye system include reduced magnitude of transient overvoltages, improved fault protection, and faster location of ground faults. There is one disadvantage of the solidly grounded wye system. For low-level arcing ground faults, the application of sensitive, properly coordinated, ground-fault protection (GFP) devices is necessary to prevent equipment damage from arcing ground faults. The NEC requires arcing ground-fault protection at 480 Y/277 V services, and a maximum sensitivity limit of 1200 A is permitted. Severe damage is less frequent at the lower voltage 208 V systems, where the arc may be self-extinguishing. 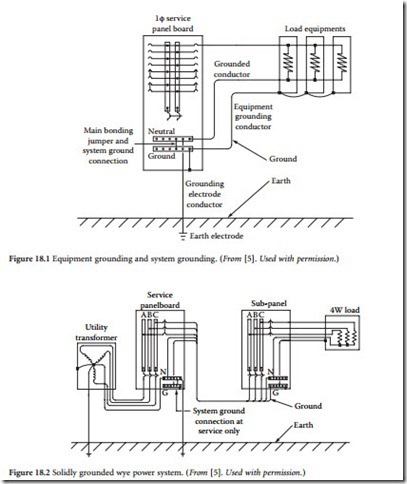 Ungrounded means that there is no intentional connection between a current-carrying conductor and ground. However, charging capacitance will create unintentional capacitive coupling from each phase to ground, making the system essentially a capacitance-grounded system. A three-phase, three-wire system from an ungrounded delta source is illustrated in Figure 18.3. The most important advantage of an ungrounded system is that an accidental ground fault in one phase does not require immediate removal of power. This allows for continuity of service, which made the ungrounded delta system popular in the past. However, ungrounded systems have serious disadvantages. Because there is no fixed sys- tem ground point, it is difficult to locate the first ground fault and to sense the magnitude of fault current. As a result, the fault is often permitted to remain on the system for an extended period of time. If a second fault should occur before the first one is removed, and the second fault is on a different phase, the result will be a double line-to-ground fault, causing serious arcing damage. Another problem with the ungrounded delta system is the occurrence of high transient overvoltages from phase-to-ground. Tran- sient overvoltages can be caused by intermittent ground faults, with overvoltages capable of reaching a 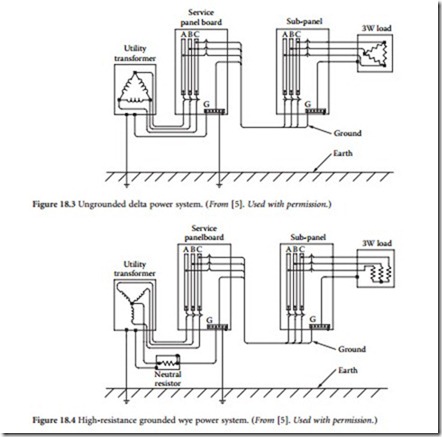 phase-to-ground voltage of from six to eight times the phase-to-neutral voltage. Sustained overvoltages can ultimately result in insulation failure and thus moreground faults Impedance-grounded means that an intentional impedance connection is made between a current- carrying conductor and ground. The high-resistance grounded wye system, illustrated in Figure 18.4, is an alternative to solidly grounded and ungrounded systems. High-resistance grounding will limit ground-fault current to a few amperes, thus removing the potential for arcing damage inherent in solidly grounded systems. The ground reference point is fixed, and relaying methods can locate first faults before damages from second faults occur. Internally generated transient overvoltages are reduced because the neutral-to-ground resistor dissipates any charge that may build up on the system-charging capacitances.

grounded to limit ground fault damage yet permit sufficient current for detection and isolation of ground-faults. Standard 142 also recommends that medium-voltage systems over 15 kV be solidly grounded. Solid grounding should include sensitive ground-fault relaying in accordance with the NEC.

Natural electrodes include buried water pipe electrodes and concrete-encased electrodes. The NEC lists underground metal water piping, available on the premises and not less than 10 ft in length, as part of a preferred grounding electrode system. Because the use of plastic pipe in new water systems will impair the effectiveness of water pipe electrodes, the NEC requires that metal underground water piping be supplemented by an additional approved electrode. Concrete below ground level is a good electrical conductor. Thus, metal electrodes encased in such concrete will function as excellent grounding electrodes. The application of concrete-encased electrodes is covered in IEEE Standard 142.