Throughout the world there is a need for generators in many different applications. In addition to the underlying need for a public supply of electricity, there are a number of situations in which independent supplies are needed. The applications for generators are categorized broadly as follows:

● private or independent generators which may run in parallel with the public supply or isolated from it. Examples of this include:

– peak shaving to reduce the maximum demand of electricity by a user; this can avoid large financial penalties during times of generally high demand on the system

– temporary supplies which are needed by the construction industry, or in cases of breakdown

● portable supplies, often trailer-mounted, where no alternative supply is available

The two main types of generator are ‘turbo’ or cylindrical-rotor and salient-pole generators. Both these types are synchronous machines in which the rotor turns in exact synchronism with the rotating magnetic field in the stator. Since most generators fall under this class, it forms the basis of most of the chapter.

The largest generators used in major power stations are usually turbo-generators. They operate at high speeds and are usually directly coupled to a steam or gas turbine. The general construction of a turbo-generator is shown in Fig. 5.1. The rotor is made from solid steel for strength, and embedded in slots within the rotor are the field or excitation windings. The outer stator also contains windings which are located in slots, this is again for mechanical strength and so that the teeth between the slots form a good magnetic path. Most of the constructional features are very specialized, such as 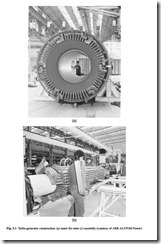 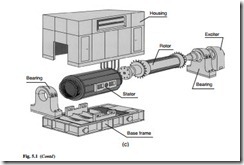 hydrogen cooling instead of air, and direct water cooling inside the stator windings, so only passing reference is made to this class of machines in the following descriptions.

More commonly used in smaller and medium power ranges is the salient-pole generator. An example is shown in Fig. 5.2. Here, the rotor windings are wound around the poles which project from the centre of the rotor. The stator construction is similar in form to the turbo-generator stator shown in Fig. 5.1.

Induction generators have a simple form of rotor construction as shown in Fig. 5.3, in which aluminium bars are cast into a stack of laminations. These aluminium bars require no insulation and the rotor is therefore much cheaper to manufacture and much more reliable than the generators shown in Figs 5.1 and 5.2. The machine has characteristics which suit wind turbines very well, and they also provide a low-cost alter- native for small portable generators. The basic action of the induction generator will be described later in this chapter, but the operation of the machine is very similar to the induction motor referred to in Chapter 10.

Inductor alternators have laminated rotors with slots, producing a flux pulsation in the stator as the rotor turns. These machines are usually used for specialized applications requiring high frequency.