Mounting of the motor

Internationally agreed coding applies to a range of standard mountings for electric motors, dc and ac, which covers all the commonly required commercial arrangements. Within IEC 60034-7 (EN 60034-7) there are examples of all practical methods of mounting motors. The NEMA publishes alternative standards within NEMA Standards publication No. MG1: Motors and Generators.

There are many standard mounting arrangements described in IEC 60034-7. The most usual types of construction for small and medium-sized motors are shown in Fig. 10.17.

All types of electric motors are classified in accordance with a standard coding to indicate the degree of protection afforded by any design against mechanical contact and against various degrees of ambient contamination.

The designation defined in IEC 60034-5, (EN 60034-5) consists of the alphabets IP followed by two numerals signifying conformance with specific conditions. Additional information may be included by a supplementary alphabet following the second numeral. This system is contained within NEMA MG 1 but is not universally adopted by the industry in the United States. The first characteristic numeral indicates the degree of protection provided by the enclosure with respect to persons and also to the parts of the machine inside the enclosure. The commonly used numbers are given in Table 10.1.

The second characteristic numeral indicates the degree of protection provided by the enclosure with respect to harmful effects due to the ingress of water. The commonly used numbers are given in Table 10.2.

Motors for hazardous areas have to meet very special requirements and flameproof motors in particular have special enclosures. More general background on the IP coding system is given in section 16.2.2.1.

The capacity of an electrical machine is often temperature-dependent, and the duty cycle of the application may significantly affect the rating. IEC 60034-1 defines a number of specific duty cycles with the designation S1 through to S10. For example, S3 describes the duty of an application with an intermittent duty shown in Fig. 10.18.

This form of duty rating refers to a sequence of identical duty cycles, each cycle consisting of an on-load and off-load period, the motor coming to rest during the latter. Starting and braking are not taken into account, it being assumed that the times taken up by these are short in comparison with the on-load period, and do not appreciably affect the heating of the motor. 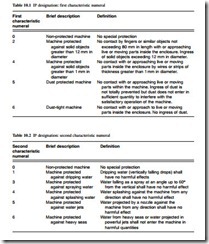