The simple loop generator has been considered in detail merely to bring out the basic principle underlying construction and working of an actual generator illustrated in Fig. 26.8 which consists of the following essential parts : 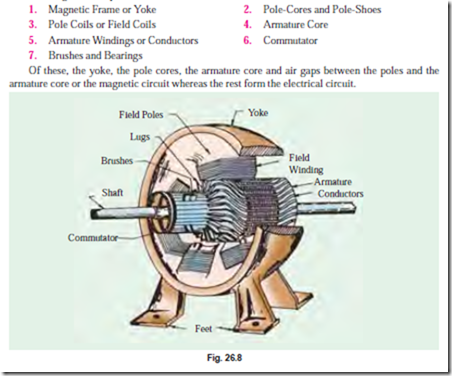 (ii) It carries the magnetic flux produced by the poles.

In small generators where cheapness rather than weight is the main consideration, yokes are made of cast iron. But for large machines usually cast steel or rolled steel is employed. The modern process of forming the yoke consists of rolling a steel slab round a cylindrical mandrel and then welding it at the bottom. The feet and the terminal box etc. are welded to the frame afterwards. Such yokes possess sufficient mechanical strength and have high permeability. 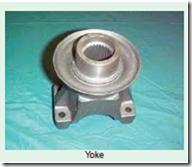 (i) they spread out the flux in the air gap and also, being of larger cross-section, reduce the reluctance of the magnetic path (ii) they support the exciting coils (or field coils) as shown in Fig. 26.14.

There are two main types of pole construction.

(a) The pole core itself may be a solid piece made out of either cast iron or cast steel but the pole shoe is laminated and is fastened to the pole face by means of counter sunk screws as shown in Fig. 24.10.

(b) In modern design, the complete pole cores and pole shoes are built of thin laminations of annealed steel which are rivetted together under hydraulic pressure (Fig. 26.11). The thickness of laminations varies from 1 mm to 0.25 mm. The laminated poles may be secured to the yoke in any of the following two ways :

(ii) The holding screws are bolted into a steel bar which passes through the pole across the plane of laminations (Fig. 26.12). 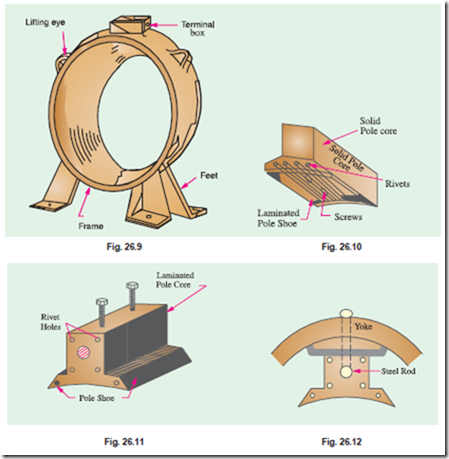 The field coils or pole coils, which consist of copper wire or strip, are former-wound for the correct dimension (Fig. 26.13). Then, the former is removed and wound coil is put into place over the core as shown in Fig. 26.14.

When current is passed through these coils, they electromagnetise the poles which produce the necessary flux that is cut by revolving armature conductors.