The exact conductors which produce these distorting and demagnetising effects are shown in Fig. 27.6 where the brush axis has been given a forward lead of q so as to lie along the new position of M.N.A. All conductors lying within angles AOC = BOD = 2q at the top and bottom of the armature, are carrying current in such a direction as to send the flux through the armature from right to left. This fact may be checked by applying crockscrew rule. It is these conductors which act in direct opposition to the main field and are hence called the demagnetising armature conductors. 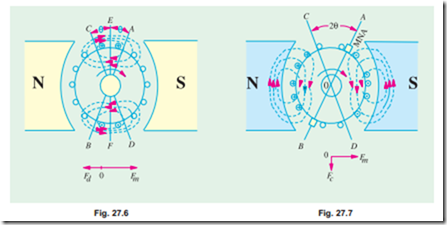 Now consider the remaining armature conductors lying between angles AOD and COB. As shown in Fig. 27.7, these conductors carry current in such a direction as to produce a combined flux pointing vertically downwards i.e. at right angles to the main flux. This results in distortion of the main field. Hence, these conductors are known as cross-magnetising conductors and constitute dis- torting ampere-conductors.

Demagnetising AT per Pole

Since armature demagnetising ampere-turns are neutralized by adding extra ampere-turns to the main field winding, it is essential to calculate their number. But before proceeding further, it should be remembered that the number of turns is equal to half the number of conductors because two conductors-constitute one turn. 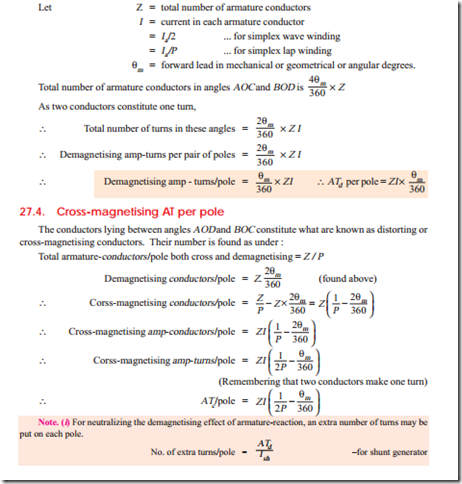 These are used for large direct current machines which are subjected to large fluctuations in load i.e. rolling mill motors and turbo-generators etc. Their function is to neutralize the cross magnetizing effect of armature reaction. In the absence of compensating windings, the flux will be suddenly shifting backward and forward with every change in load. This shifting of flux will induce statically induced e.m.f. in the armature coils. The magnitude of this e.m.f. will depend upon the rapidity of changes in load and the amount of change. It may be so high as to strike an arc between the consecutive commutator segments across the top of the mica sheets separating them. This may further develop into a flash- over around the whole commutator thereby short- circuiting the whole armature. 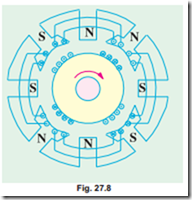 These windings are embedded in slots in the pole shoes and are connected in series with armature in such a way that the current in them flows in opposite direction to that flowing in armature conductors directly below the pole shoes. An elementary scheme of compensating winding is shown in Fig. 27.8.

Owing to their cost and the room taken up by them, the compensating windings are used in the case of large machines which are subject to violent fluctuations in load and also for generators which have to deliver their full-load output at consider- able low induced voltage as in the Ward-Leonard set.

No. of Compensating Windings 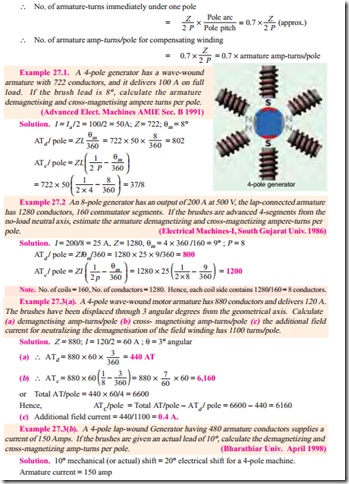 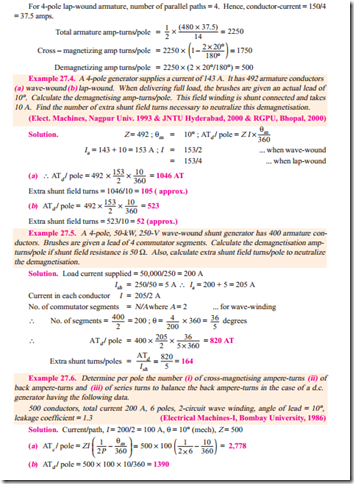 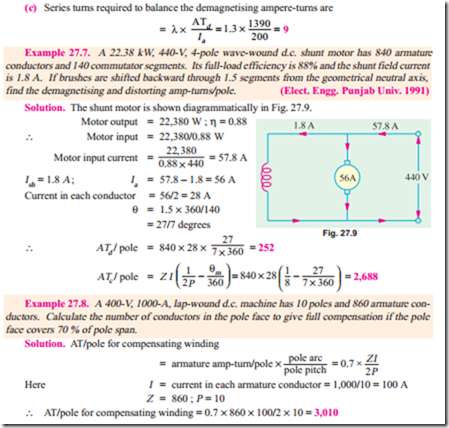 2. A 250-V, 25-kW, 4-pole d.c. generator has 328 wave-connected armature conductors. When the machine is delivering full load, the brushes are given a lead of 7.2 electrical degrees. Calculate the crossmagnetising amp-turns/pole. (1886, 164)

3. An 8-pole lap-connected d.c. shunt generator delivers an output of 240 A at 500 V. The armature has 1408 conductors and 160 commutator segments. If the brushes are given a lead of 4 segments from the no- load neutral axis, estimate the demagnetising and cross-magnetising AT/pole.

4. A 500-V, wave-wound, 750 r.p.m. shunt generator supplies a load of 195 A. The armature has 720 conductors and shunt field resistance is 100 W. Find the demagnetising amp-turns/pole if brushes are advanced through 3 commutator segments at this load. Also, calculate the extra shunt field turns required to neutralize this demagnetisation. (600, 4800, 120)

5. A 4-pole, wave-wound generator has 320 armature conductors and carries an armature current of 400 A. If the pole arc/pole pitch ratio is 0.68, calculate the AT/pole for a compensating winding to give uniform flux density in the air gap. (5440)

6. A 500-kW, 500-V, 10 pole d.c. generator has a lap-wound armature with 800 conductors. Calculate the number of pole-face conductors in each pole of a compensating winding if the pole face covers 75 percent of the pitch.

7. Three shunt generators, each having an armature resistance of 0.1 ohm are connected across a common bus feeding a two ohms load. Their generated voltages are 127 V, 120 V, and 119 V. Neglecting field currents, calculate the bus voltage and modes of operations of the three machines. (JNTU, Hyderabad, 200)

Hint : Solve the circuit from the data given. Since the voltages differ considerably, first machine with 127 V as the generated voltage with supply the largest current.