Transformers for power supply units and isolating transformers are subject to production testing, where compliance is generally checked by inspection and electrical tests. The electrical tests establish earth continuity (for class I), no-load output voltage, dielectric strength between live parts of the input circuit and accessible conducting parts of the transformer, and dielectric strength between input and output circuits.

Tests on larger transformers are carried out as part of the manufacturing process to ensure that transformers meet the characteristics specified by the purchaser. The tests prescribed by IEC are grouped in three categories, these being routine tests, type tests and special tests:

(a) routine tests, to be carried out on all transformers

(b) type tests, to be carried out on new designs or the first unit of a contract

(c) special tests, to be carried out at the specific request of the purchaser

(a) Routine tests: These are carried out on all transformers and include,

This is the winding resistance used in the equivalent circuit.

• measurement of voltage ratio and check of phase displacement. The voltage ratio is checked on each tap position and the connection symbol of three-phase transformers is confirmed.

• measurement of no-load loss and magnetizing current, at rated voltage and frequency. This is measured on one set of windings with the other windings open circuit. Because the power factor at no-load may be between 0.1 and 0.2, special low power factor wattmeters are necessary to ensure accuracy. A three-wattmeter connection is used for load loss measurement of three-phase transformers, because the previously used two-wattmeter method is inaccurate.

• dielectric tests, consisting of applied voltage and induced voltage tests, sometimes linked with a switching surge test. The applied voltage test verifies the integrity of the winding insulation to earth and between windings, and the induced voltage test verifies the insulation between turns and between windings. The general requirements set down by IEC are shown in Table 6.2. For transformers rated up to 300 kV, the induced voltage test is for one minute at an overvoltage of between 2.5 and 3.5 times rated voltage, carried out at a higher frequency to avoid core saturation. For rated voltages over 300 kV, the induced test is for 30 min at 1.3 or 1.5 times rated voltage, with an initial short period at a higher voltage to initiate activity in any of the vulnerable partial discharge sites; this is linked with a partial discharge test. This long-term test will not prove the insulation against switching overvoltages, and so for this it must be linked to a switching impulse test.

• tests on OLTCs to confirm the timing of the tapchanger mechanism and to prove the capability on full-voltage and full-current operation.

(b) Type tests: These are carried out on new designs, or on the first unit of a contract. 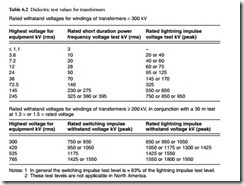 and to establish the top oil temperature and the average winding temperature at a lower voltage. Where a number of transformers are available, it is possible to sup- ply them in a ‘back-to-back’ connection and to make the test at full voltage and full current. The test is carried out over a period of 8 to 24 h to establish steady- state temperatures, and it may be associated with Dissolved Gas Analysis (DGA) of oil samples taken during the test to identify possible evidence of micro-deterioration in the insulation at high local temperatures.

• a lightning impulse voltage test to prove performance under atmospheric lightning conditions. The specified impulse waveform has a 1 µs front time (time-to-crest) and a 50 µs tail time (time from crest to half-crest value). The winding is tested at a level prescribed by IEC which is linked to the rated voltage. This is set out in Table 6.2. One test application is made at 75 per cent of the test value (Reduced Full Wave, or RFW) and this is followed by three test applications at full test value (FW). The test is considered satisfactory if there are no discrepancies between the recorded oscillograms of applied voltage and between the recorded oscillograms of neutral current.

(c) Special tests: These are carried out at the specific request of the purchaser.

The more usual special tests are,

• chopped-impulse wave test the purchaser may wish to simulate the situation when a lightning surge propagated along a transmission line is chopped to earth by a lightning protection rod gap mounted on the bushing. The Chop Wave (CW) is specified as an FW waveform with a chop to earth occurring between 3 and 7 µs after the crest. The chop wave test is combined with the lightning impulse voltage test and the test sequence is 1-RFW, 1-FW, 2-CW and 2-FW test applications, sometimes followed by a further RFW for comparison pur- poses. A successful test shows no discrepancies between applied voltage oscillo grams or between neutral current oscillograms, although if rod gaps are used to perform the chopped-wave test there may be acceptable deviations between neutral current oscillograms after the time of chop. If a triggered gap is used to control time of chop the oscillograms should be identical.

• determination of zero-sequence impedance, measured between the line terminals of a star-connected or zigzag-connected winding connected together, and its neutral terminal. This is expressed in ohms per phase, and it is a measure of the impedance presented by the transformer to a three-phase fault to earth.

through-fault conditions. IEC recommendations allow the withstand performance of a winding to be demonstrated by calculation or by test. The resource needed to test fully a large power transformer is substantial, and few test facilities are available in the world.

• determination of sound levels, which can be measured in terms of sound power,  sound pressure or sound intensity. The latter method was developed especially  for measurement of low sound levels in the presence of high sound ambients. In transformers which have been designed with low-flux density to reduce the magnetostriction effect, the predominant sound may be produced by the windings as a result of movements caused by the load currents. This load current generated sound should be measured by the sound intensity method.

When transformers are in operation, many users carry out surveillance testing to monitor operation. The most simple tests are carried out on oil samples taken on a regular basis. Measurement of oil properties, such as breakdown voltage, water content, acidity, dielectric loss angle, volume resistivity and particle content all give valuable information on the state of the transformer. DGA gives early warning of deterioration due to electrical or thermal causes, particularly sparking, arcing and service overheating. Analysis of the oil by High-Performance Liquid Chromatography (HPLC) may detect the presence of furanes or furfuranes which will provide further information on moderate overheating of the insulation.

Sensors can be built into the transformer so that parameters can be monitored on a continuous basis. The parameters which are typically monitored are winding temperature, tank temperature, water content, dissolved hydrogen, partial discharge activity, load current and voltage transients. The data collection system may simply gather and analyse the information, or it may be arranged to operate alarms or actuate disconnections under specified conditions and limits which represent an emergency.