The battery is at present the most practical and widely used means of storing electrical energy. The storage capacity of a battery is usually defined in ampere-hours (Ah); energy is strictly defined in kilowatt-hours (kWh) or joules, but since the voltage of a particular battery system is normally fixed and known, the Ah definition is more convenient. The terms battery and cell are often interchanged, although strictly a battery is a group of cells built together in a single unit.

Batteries can be classified into primary and secondary types.

A primary battery stores electrical energy in a chemical form which is introduced at the manufacturing stage. When it is discharged and this chemically stored energy is depleted, the battery is no longer serviceable. Applications for primary batteries are generally in the low-cost domestic environment, in portable equipment such as torches, calculators, radios and hearing aids.

A secondary or rechargeable battery absorbs electrical energy, stores this in a chemical form and then releases it when required. Once the battery has been discharged and the chemical energy depleted, it can be recharged with a further intake of electrical energy. Many cycles of charging and discharging can be repeated in a secondary battery. Applications cover a wide range. In the domestic environment secondary batteries are used in portable hand tools, laptop computers and portable telephones. Higher powered applications in industry include use in road and rail vehicles and in standby power applications. The capacity of secondary battery systems ranges from 100 mAh to 2000 Ah. Their useful life ranges from 2 to 20 years; this will depend, among other things, upon the number of charge–discharge cycles and the type and construction of battery used.

The majority of primary cells now in use fall into one of eight types:

Each of these is briefly reviewed in the following sections.

This battery is based upon Leclanché cells with zinc as negative and MnO2 as the active positive electrode with carbon as current collector. In its latest form, this has been in use since 1950. The basic cell operates with a voltage range of 1.2 V to 1.6 V, and cells are connected in series to form batteries such as AAA, AA, C, D, PP3 and PP9. Typical construction of a PP9 battery is shown in Fig. 12.1.

Zinc carbon batteries are low in cost, they have an operating temperature range from –10°C to 50°C, and the shelf life at a temperature of 20°C is up to three years. They are ideally suited to applications with intermittent loads, such as radios, torches, toys, clocks and flashing warning lamps.

The alkaline manganese battery differs from the zinc carbon in that the electrolyte is a potassium hydroxide solution as opposed to an ammonium chloride solution and that the configuration is inverted with zinc on the outside. A nickel-plated steel can is used as the positive current collector. The alkaline manganese battery became commercially available in its present form in the late 1950s. The basic cell operates with a voltage range of 1.35 V to 1.55 V, and cells are connected in series to form the standard battery sizes N, AAA, AA, C, D and PP3. Typical construction of a single-cell battery is shown in Fig. 12.2.

Cost is in the medium-low range. The operating temperature range is –15°C to 50°C, and the shelf life at 20°C is up to four years. Alkaline manganese batteries are suited to a current drain of 5 mA to 2 A; this makes them ideally suited to con- tinuous duty applications which can include radios, torches, cd players, toys and cameras.

This type has been in commercial use since the 1930s. The single cell operates with a narrow voltage range of 1.2 V to 1.4 V; it is only available as a single button cell, the construction of which is illustrated in Fig. 12.3.

Cost is in the medium range. The operating temperature range is 0°C to 50°C, and the shelf life at 20°C is up to four years. Mercury oxide button cells are suitable for low current drains of 0.1 mA to 5 mA, with either continuous or intermittent loads. 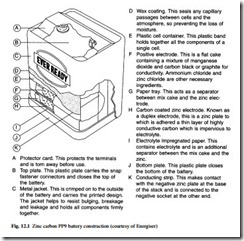 Their small size and narrow voltage range are ideally suited for use in hearing aids, cameras and electric instruments.

This has been in commercial use since the 1970s. The single cell operates with a very narrow range from 1.50 V to 1.55 V. Construction of a silver oxide button cell is shown in Fig. 12.4.

Cost is relatively high. They have an operating temperature range from 0°C to 50°C and a shelf life of up to three years. In button cell form, they are suitable for a current drain of 0.1 mA to 5 mA, either continuous or intermittent. Their small size and very narrow voltage range makes them ideal for use in watches, calculators and electrical instruments.

This battery has been in commercial use since the mid-1970s. A single cell operates with a voltage range of 1.2 V to 1.4 V. The construction of a zinc air button cell is shown in Fig. 12.5. Because one of the reactants is air, the battery has a sealing tab 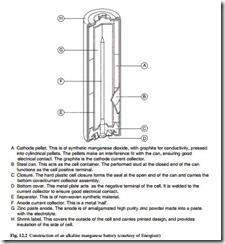 which must be removed before it is put into service. Following removal of the tab, the cell voltage will rise to 1.4 V.

Cost is in the medium range. Operating temperature is from –10°C to 50°C and the shelf life is almost unlimited while the seal is unbroken. They are produced as a but- ton cell, and are suitable for current drain from 1 mA to 10 mA, with either intermit- tent or continuous loads. The service life is relatively short due to high self-discharge characteristics, but end of life can be accurately estimated because of the flat discharge current. The general performance and the life predictability make zinc air batteries ideal for use in hearing aids. 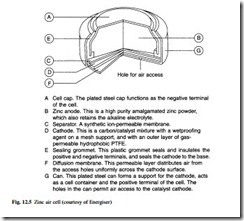 polar solvent such as ethylene carbonate. This type has been available since 1975, but it has only become commercially available in the past few years. The single cell operates with a relatively high voltage, in the range 2.8 V to 3.0 V. A typical construction is shown in Fig. 12.6.

Cost is relatively high. The operating temperature covers a wide range, from –30°C to 50°C, and the shelf life is up to ten years. The batteries are suitable for continuous or intermittent loads; in the form of a button cell they are suitable for 0.1 mA to 10 mA current drain, or as a cylindrical cell they can deliver from 0.1 mA to 1 A. They have a high discharge efficiency down to –20°C, and are suitable for applications in instruments, watches and cameras.


Lithium thionyl chloride This type utilizes a liquid positive electrode. The single cell has a high voltage in the range 3.2 V to 3.5 V, with an open-circuit voltage of 3.67 V. A cross section of an example is shown in Fig. 12.7.

Cost is relatively high. The operating temperature range is one of the highest avail- able, from –55°C to 85°C, and the shelf life is up to 10 years. These batteries are suit- able for intermittent or continuous duties, with a current drain from 15 mA up to 1.5 A. Their high energy density (>700 Whdm−3), wide temperature range and high discharge efficiency make these batteries particularly well suited to memory back-up applications in programmable logic controllers, personal computers and alarm systems. 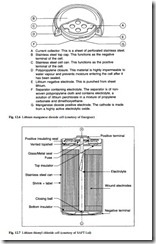 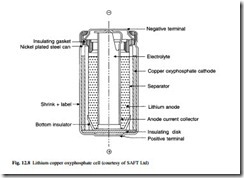 These utilize iron sulphide or copper oxide positive electrodes. The single cell has a voltage range 2.1 V to 2.5 V, with an open-circuit voltage of 2.7 V. A sectional view of a typical unit is shown in Fig. 12.8.

The batteries are expensive because of their high energy density. They operate over a temperature range – 40°C to 60°C and they have a shelf life of up to 10 years. They are suitable for continuous loads from 37 µA up to 25 mA. The high energy density and wide temperature range make these batteries specially suitable for applications in computers.